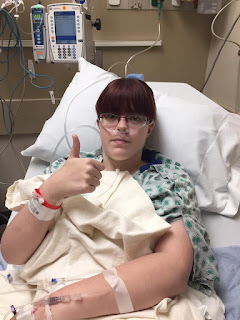 So today I had my surgery to remove my Gallbladder, and I must say my whole day has been pretty rough. And getting up early to get to the hospital was a real pain. As some of you might remember from the post I wrote yesterday, I had to get up exceedingly early because I had to be at the hospital two hours prior to my surgery and my surgery was scheduled for 7:30 am.

My parents and I got there basically on time; we just got kind of lost trying to find the pre-op check in desk. The hospital that I had to go to is one of the larger hospitals that we have here in Ohio. But check in was a really simple process just verifying name and date of birth, all those standard questions. I didn’t have to wait too long to get upstairs to the main pre-op area, and my mom went up with me.

The nurse left me to put my gown and everything on and get wrapped up in my blankets after she took my height and weight. After that someone from pharmacy came over to my bay and verified all my medication and the last time I took every one of them. That was really annoying because I think she was expecting me to remember the times I took them, even if it was last week when I took some of my ‘as needed’ medications. But for the most part I remembered all of the days I took my medications. That was the only thing she wanted from me though, so after that she left my bay and my mom tried to keep me laughing as we waited for a nurse to come in and start my IV.

I think it was maybe another 20-30 minutes until a nurse came in to place my IV. She was giving my good veins a thorough once over. They didn’t really want to cooperate since I’ve been so dehydrated because of my gallbladder making me throw up even more than I usually do. I do have to congratulate her though she got my IV placed on the first try in the top of my left hand. After that they expected me to go pee for a pregnancy test, which I was really annoyed with, because there’s not a snowballs chance in hell that I’m pregnant. Apparently it’s a hospital rule that you have to take a pregnancy test unless you’re over 50 years old and/or have had a Hysterectomy. They thought if they said they were going to straight cath me that I’d get out of bed and go to the bathroom. But that didn’t work because I told them that they could go ahead and do it because I really didn’t have to go to the bathroom, but then they turned around and drew blood from my right wrist for a blood serum pregnancy test.

I also talked to my Anesthesiologist before I went into surgery as well. He was a bit nervous about putting me under when he saw my medication and allergy lists. He seemed even more wary when I told him what happens to me during surgery and when I’m brought out of anesthesia. During surgery and when I’m brought out of anesthesia I often times turn blue and my heart rate gets incredibly high usually around 120 bpm or higher. But if I’m on oxygen before surgery usually I don’t get as sick as usual, so he agreed to put me on oxygen while we were waiting for the results of my pregnancy test. He also said he was going to wait until I was moderately coherent to remove the breathing tube after I got out of surgery just in case my oxygen levels decided to plummet.

After the surgery I remember vaguely feeling them remove the tube and when I was completely coherent I realized they put my cannula back on me and the oxygen was on. But that was also when the pain just hit me like a battering ram to the stomach. They gave me some IV pain meds and IV Zofran when they noticed I was awake and crying because it hurt so badly. The pain was so bad, that at first I was convinced that they couldn’t remove my gallbladder laproscopically and had removed it with the single large incision. They didn’t though; my gallbladder was removed using the laparoscopic method as planned.

The nurse then made me eat a couple graham crackers and drink some Sprite before she’d let me have pain pills. Which I did successfully eat and not throw up. And these pain pills are pretty potent, I have no option but to sleep and I have to take them every four hours.

But I’m at home in bed, safe and sound and it’s all an uphill battle from here. Hopefully this is the beginning to a life with less stomach pain, I’m trying to be as optimistic as possible. I’m going to get this posted and then take my meds since I can feel my pain meds wearing off and it’s really unpleasant.
Labels: billary dyskinesia cholecystectomy recovery gallbladder removal spoonie surgery surgery recovery this spoonie speaks