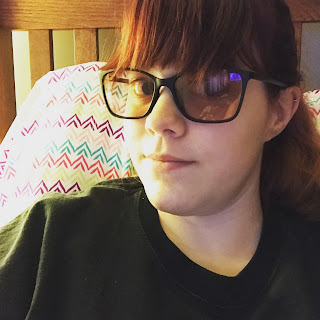 I have been given this product as a part of a product review through the Chronic Illness Bloggers network. Although the product was a gift all opinions in this review remain my own and I was in no way influenced by the company.

This is a review for Axon Optics, they are migraine/light sensitivity glasses. The glasses block out certain light wavelengths that contribute to migraines and photosensitivity. They also reduce glare, which I have learned is one of my major light related triggers for my migraines. They also have UV protection to help you cope with being in a possible trigger environment. This is all because of their proprietary lenses.

Though before we get into the meat of the review I’m going to tell you a bit about myself and my journey with light sensitivity. And I really must say dealing with migraines and light sensitivity is really draining. Obviously because light and migraine triggers are completely impossible to avoid unless you live in a cave somewhere.

My migraines began when I was in Middle School and they used to be manageable with over the counter migraine medication and wearing my sunglasses around the house when I would be home sick from school. While my migraines were mostly controlled at the time my light sensitivity got progressively worse, I was in and out of the ophthalmologist’s trying to figure it all out. But in the end they weren’t able to nail down an exact cause as to why I’m so light sensitive.

Now let’s skip forward to High School, my migraines and light sensitivity were as worse as they ever were and no longer controlled by OTC meds. And I’d be taking more Tylenol than any one person should probably safely consume in a day. I was having migraines most days of the week and my light sensitivity was near crippling. My eyes would water and it would feel like someone was trying to remove my eyes with flaming hot knives. Because of the pain I had trouble focusing on my schoolwork, I would miss days of school entirely or have to leave school early.

But it wasn’t until a few months after I graduated, that I started getting my migraines taken more seriously by my parents. They’re the rulers of the insurance so I couldn’t exactly run off by myself and try to get a referral to a neurologist. I suppose thinking back now that, that was when my health started declining more in general. But I started ending up in our Urgent Care office to get injections of pain medicine to stop the migraines. Then that happened more and more frequently until I, one evening was in so much pain that I had enough of the migraine I had and went to the Emergency Room. I was hydrated and medicated until the migraine broke and they deemed me not a risk to have a blood clot or anything life threatening. I left the ER that night with pain medicine and a referral to see the hospital’s lead neurologist.

Now here I am at 21 years old, better off migraine wise than I’ve been my whole life. I went from having 12-15 migraines a month to about 5-7, for me that’s a major improvement because originally my body didn’t want to respond to my preventative medications. But we’ve found the correct combination of medications to help my migraines and a few other conditions I have as well.

And while my migraines have gotten better over the years I still deal with severe light sensitivity. My Neurologist says that since I’ve been in so much pain from migraines without adequate pain management that it makes my body more readily say that I’m in excruciating pain from minimal stimuli. I would always have to weigh the pros and cons of going into certain stores, like Walmart since they were very brightly lit. I would even have to think about what movies I could watch in a movie theater, let’s just say Frozen is one of my favorite movies but also my worst migraine trigger.

So now that you all know my history with migraines and light sensitivity we can get to the review part of this post!

So when I ordered the glasses I ordered the JURA frames  with the indoor tint, I like them because light getting in my peripheral vision isn’t too much of a problem but the glasses are a bit big for my face. I chose the indoor tint because I spend a lot of time indoors so the outdoor tint didn’t seem worth it to me. I would recommend choosing a tint based on where you spend the bulk of your time.

There are a decent amount of regular frame options for you to choose from. There are also options of frames that fit over prescription glasses, frames that wrap somewhat closer to your head and maximum wrap frames that completely shield your peripheral vision. Though if you don’t like any of Axon Optic’s frames you do have the option of sending in a pair of frames that you know you like and that fit your face. You also have the choice of getting the glasses in your prescription eye glass strength. The same tinting is used in their contacts but the recommend you try a pair of the glasses first before you commit to the contact lenses.

Make sure you carefully look through all the color options for the frames that you want to get. I got the JURA frames in black. To me I thought the black would be a shiny black instead of a matte black and it doesn’t seem as professional I think. So carefully look through all the frames and make sure you’ve looked at all the possible frame and color choices. But the color and the size of the frames were the only issues I had with the glasses. If I could go back and reorder I’d probably send in my own frames but that’s just my personal preference.

But I have been wearing my Axon Optics for several months now and I do have to say they’ve helped greatly. I can go into stores with less fear that I’ll develop a migraine, I’ve also noticed that I can get more work done on the computer and they definitely do cut down on glare. And I was able to watch Frozen and not get a migraine half way through. So I’m really pleased with these glasses overall.

Another thing you all might be wondering is if the glasses could give you a migraine as you adapt to using them. And my answer is going to be no in the time that I’ve been using them, which has been several months, I never experienced any sort of adaptation migraine. The color of the lenses isn’t as extreme when you put them on as I originally thought. It doesn’t take very long at all for your eyes to adjust to wearing the glasses or the color of the lenses.

So all in all these glasses are great for dealing with light sensitivity and migraines. Hopefully they'll help you guys as much as they helped me. You can check out all of Axon Optic's website here. And they're also available to purchase through Amazon here.