So it’s almost the one year anniversary of my tonsillectomy and I thought I’d tell you guys about what I went through. And this whole ordeal of trying to get a tonsillectomy wasn’t easy. It kind of seemed like doctors nowadays are either Pro-Tonsillectomy or just completely against it. And I do understand the risks of surgeries, I’ve had four of them so it’s not like this whole thing was foreign to me.

So let’s start at the beginning of my adventure, it had started with a small case of the sniffles and a sore throat. I tried to not think about it but eventually my throat got so sore that I couldn’t eat very well, at this point I investigated my throat and see why I was in so much pain. I looked at the back of my throat in the mirror and it was a pretty bad sight. My tonsils were covered in that icky white stuff you usually see when you get strep throat. I felt pretty positive that I had strep throat, so the next morning I went to urgent care. They did a rapid strep test and it came back negative, so they sent the swab off to culture at the hospital lab. A few days later the lab called me and told me that the test was completely negative. They told me to gargle some Children’s Benadryl and to take it easy for a few days.

At the time I was volunteering at my local hospital and I was scheduled to work in the ICU. I felt bad that I had to keep calling in sick, but I didn’t want to take the chance of somehow passing this onto someone and end up killing them.

This went on for several weeks and after a few weeks I finally went and saw my ENT. He took a swab of my throat even though I told him that I already had one of those. And he prescribed me a seven day course of Cephlex and told me to come back when I finished all the pills.

I took the Cephlex and waited, I was hoping a simple course of antibiotics would fix me right up and I’d be well on my way to being back at work. But apparently my body didn’t exactly feel like being cooperative. By the end of the week my tonsils still looked like puffy snowballs sitting in the back of my throat. This cycle repeated three or four more times, each ending in me getting higher and higher doses of Cephlex.

I’m allergic to so many antibiotics that it isn’t extremely safe to just switch the type of antibiotic that I can take. Because there’s a really strong chance that I could go into anaphylactic shock and die. After putting me on the highest dose of Cephlex that was still considered safe for me, we unfortunately had to start thinking differently. He prescribed me Intramuscular injections of an antibiotic called Rocephen. But I had to remain in our little out patient unit for half an hour to make sure I didn’t have any sort of latent reaction to the drug.

But let me just say, I’m fairly certain that, that stuff should be used to torture people. It kind of feels like you’re getting battery acid injected into you. I had to have two grams of the stuff, everyday for three days straight. And for those of you who are unfamiliar with injectable medications, two grams equals one shot into each butt cheek. It was insanely painful and difficult to sit for like a month even after the injections.

Once I finished the injections I was so excited, hoping maybe I’ll finally feel better. But again my hopes got crushed like a tiny bug. My tonsils were still very swollen and were still covered in that white film. It was progressively getting more and more difficult for me to eat anything other than soft foods. And the Rocephen made me feel so sick that I didn’t really want to eat anyway.

The day after I finished the injections I was back in my ENT”s office. He was as perplexed and frustrated as I was, he was thinking about sending me to a contagious disease specialist. And hearing your doctor say that is actually insanely terrifying. I outright refused to go to that doctor to be poked at like a science experiment. And also by this point I probably asked to have a tonsillectomy, probably ten or more times. He started getting mad at me every time I brought it up which was quite annoying and in my opinion rude. As a complete last ditch effort to get me better, he prescribed me IV Rocephen.

If I remember correctly it was a two gram infusion with a fluid piggy back, given over roughly half an hour depending on how I tolerated the medication. Now you all might be thinking that each time I would get an infusion, I would get a new IV. The correct answer is no, my ENT actually gave the order for the line to be left in my arm for the three days of infusions. 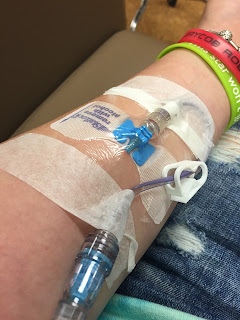 Now you all are also probably thinking wow this girl has so many antibiotics in her system she must be better by now right? Nope wrong. I’d been stabbed with needles, had an IV line had five or more throat swabs and ended up in the ER.

This was a very long, tiring fight. I eventually went to a different ENT entirely, he took one look at my throat and agreed to do a tonsillectomy. I was so happy I actually sat there and cried, then hugged him. I scheduled my surgery for about two weeks after I saw him. But before my surgery he gave me a huge two-week prednisone taper that I had to take. He said with the current state of my throat the inflammation had to go down as much as possible or I’d be at an increased risk for complications. Let me put it this way, if an experienced nurse can look down my throat and actually be grossed out by it I’d say that’s kind of alarming.

So that’s all for now, the rest of my journey will be in Part Two.