EDS Blog Challenge Day 14 Has Being Sick Impacted Your Relationships? 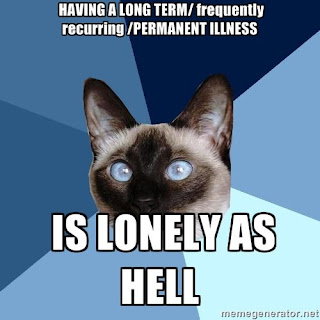 Yes, it has impacted my relationships a lot. It’s hard for me to make friends and keep them. When I was attending regular college, even though I was in nursing school it was hard for my friends to wrap their heads around how sick I can get. They often thought that I was being melodramatic, though one time I showed up to school with a heart rate of 150 and kept blacking out, my teacher almost sent me home. But even after that they couldn’t understand most of my illnesses.

I’m kind of skittish around healthy people; I try to act as normal and healthy as possible. I really try to make friends in real life but it doesn’t work out as well as I hope for usually. I can talk to people and be friendly but it doesn’t progress too far past that mostly because people think I’m flaky. Or they think I’m avoiding them I don’t really know for sure and I just can’t keep up with them. They want to go out and drink all weekend and I don’t really want to drink excessively in public. Mainly because of all the medicine I take it amplifies the effects of alcohol. They just want to go do so many things that I just can’t do. Eventually most normal people will slowly fade from my life though I do have two healthy friends but that’s not much.

And after a nasty break up I’m afraid to love people again. I’m afraid that it will bother anyone I go near that I have so many problems. Often times normal people, seem to sense that there’s something off about me, even if I’m trying to act completely normal.  Has anyone else had this problem or is it all just in my head? Also my main problem is my anxiety making me feel like I’m too much of a burden for anyone to actually love me.

I’ve been frustrated a lot lately that I’ll never be completely normal and be able to enjoy being in my 20’s. A lot of people around me talk about how the went out and went to the mall, or they’re getting married or having a baby. They can’t relate to me having dozens of doctor appointments, and I can’t relate to any of the ‘normal’ things that are going on with them.

And even the people that I’ve been friends with for a very long time have left my life and it’s frustrating. I want to be able to keep up with them, or any normal person but right now I’m just not in a good place. My illnesses currently require that I be homebound a lot of the time, not to mention that I do need naps everyday to be able to go about my day effectively. Also my inability to eat almost all foods has put me in a bad place as well, I try to avoid eating when out as much as possible so I don’t throw up in public because of my Gastroparesis.

Most of the friends I do have reside on the Internet and are scattered across the world. We may not be close in distance but we all care about each other. And we can all relate to each others struggles and I don’t have to try and be normal and perfect. I am grateful for these friends, they have made the last couple months okay since I’ve gotten sicker.