EDS Blog Challenge Day 2 What are my associated illnesses? 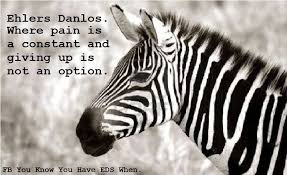 Welcome to Day 2 of the EDS Blog Challenge! Today I'll be talking about my conditions that I have that are usually associated with EDS.

I’ve been in pain for as long as I remember. I used to think that being in constant pain was completely normal, but now that I’m older I know that it actually isn’t okay. I’ve been officially diagnosed with chronic pain for four or five years now. I’ve had different reasons for various parts of me hurting. I broke both of my kneecaps when I was younger, I have shin splints in both shins, I have tendonitis in my left ankle and I messed up my right shoulder during a fall. All of these things have translated to being in chronic pain for a long time, and I’m still in pain today, but I tried not to voice my discomfort.

But recently after jumping through many hoops, I got referred to my hospitals pain management team by my neurologist and my Nurse Practitioner. Through pain management we have also come to the conclusion that I have Fibromyalgia and that it was probably triggered by a car accident I was in two years ago. But now I’m on a good pain treatment plan and I’m moderately functional.

Some doctors I’ve encountered have been very skeptical of my pain and Fibromyalgia diagnosis. They often think that I’m being melodramatic about my pain, or think that Fibromyalgia isn’t a actual condition. Sometimes I’ve only had other doctors believe them after I show them my diagnosis paperwork that I usually carry with me for emergencies or for appointments.

I also have pain resulting from my joints bending too far. My thumbs bend awkwardly when I grab anything without my thumb splints on to keep my joints in place. My knees also hurt because they bend so far backwards when I walk. I also have neck pain because it’s hard for my neck to support my head. That has also resulted in several of my neck vertebrae being straight instead of being curved like in a normal neck. And you can’t forget about the everyday pain of dislocating joints at the drop of a hat.

I also have what is called Idiopathic Gastroparesis. In normal language, idiopathic means of no known cause and Gastroparesis means stomach paralysis. My stomach doesn’t digest food correctly and it’s also difficult for me to absorb nutrients from food. Most of the time my body barely digests food at all and I spend most of my time throwing up. That’s because the food just sits there and ferments basically, leading to me being incredibly nauseous and miserable.

But for the record this is in no way related to an eating disorder, often times I literally just can’t eat.  There comes a point where you’re in an awkward position, your stomach is full of undigested food from say breakfast and then it’s time for another meal. And you just can’t eat, it’s not much of an actual choice when your stomach just cant eat anymore. Really it’d kind of like eating Thanksgiving over and over again it’s just plain uncomfortable. That’s why you’ll see many of us with Gastroparesis eating small snacks and small meals all day. Now you might think that we’re just find and normal or you might think we’re just eating too much food and that’s the reason why we’re throwing up all the time. But that’s one of the ways we try to manage food intake in hopes we might keep down enough calories to at least keep our weight stable. But this isn’t related to bulimia, we aren’t making ourselves throw up, it just happens. It’s kind of the equivalent of a hairball.

There are very few ways to treat Idiopathic Gastroparesis, it can actually get very annoying because we run the risk of our bodies adapting to our medications. In America, one of the standard medications used to treat Gastroparesis is called Reglan. It’s a medicine that forces gastric emptying, but it comes with some worrying side effects and in general I’m only a fan of Reglan in emergency situations when I can’t stop throwing up. But the side effects I don’t like is Parkinsons like symptoms, I usually end up with tremors, but the medicine doesn’t give you Parkinsons. Usually if you stop the Reglan soon enough after the side effects present themselves they’ll dissipate and you should be fine, though you should always check with your doctor before you stop taking your medication.

If you have the option of switching medication, I would. My GI doctor switched me to a medication called Domperidone. It isn’t available in the U.S because it isn’t approved by the FDA, because it has the possibility of causing Long QT Syndrome, but my doctor said that it wasn’t that big of a problem to worry about in my case. But my doctor was able to write me a prescription, I sent it to a contact that my doctor has in Illinois I think. Then his contact was able to work his magic and got my medication from a pharmacy in London and got it shipped to me. It was a tedious annoying process.

Though I’ve been on Domperidone for awhile now and I do have to say it was worth the wait. I think it has improved my functionality a bit and I could eat more than I did before. And I think I’m finally able to consume enough food to maintain my weight, though recently chemo and surgery have caused me to lose almost 30 pounds.

Lastly I have POTS, it’s a type of Dysautonomia. It’s where the autonomic nervous system doesn’t work appropriately. In POTS when we change positions from laying to standing for example out blood pressure can plummet and our heart rate will usually get really high. This can result in episodes of blacking out of partially blacking out. Usually though I can keep my blood pressure stable with an adequate amount of Pedialyte and my heart rate is kept stable with low dose Propranolol.