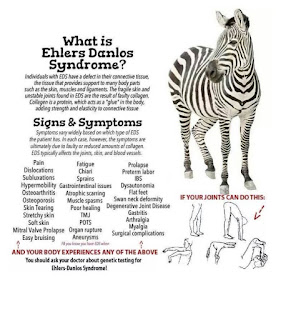 It took me an incredibly long time to be accurately diagnosed with EDS. I always have had problems with my body. I’ve spent a large chunk of my life being admitted to the hospital or going through tests that actually yielded no accurate results. It wasn’t until recently that I started getting more accurate diagnoses. My doctors finally stopped looking for the easy answers and started testing me for the more rare diagnostic options. And look things are finally slowly turning up positive, I wish that they had done this years ago so I might have a somewhat better quality of life but I’m trying to deal with it.

It took me 20 years and 1 month to get my EDS diagnosis. And it’s the hardest thing I’ve ever fought for. A tentative diagnosis of EDS was made by one of my surgeons when I was 17, but unfortunately it never progressed past that. My parents thought that it was improbable since neither of them are as sick as me but my mom does have medical problems, she just chooses to ignore hers and suffer in silence. But she can do “party tricks” similar to my own and has had joints dislocate and various other problems, she refuses to admit it but she has EDS too.

It started with my Primary doctor, I showed her what I can do and I actually made her cry because of the party tricks I can do. She apologized at one point for never believing that I had any problems. From there she urged me to go see one of my surgeons, I chose the one that braced my knees since he’s dealt with me for almost four years now. He unfortunately didn’t really know what to do with me so I talked to my Neurologist and she referred me to a Rheumatologist. The Rheumatologist wasn’t a nice woman at all she was honestly incredibly rude to me. But she conceded that there was a incredibly high probability of me having some type of EDS. She referred me to the Genetics Department at OSU. By the end of the three-hour long appointment the Genetics Team gave me the diagnosis of Hypermobile EDS. They discharged me and gave me a list of things I had to do. I had to have a myriad of testing done, it was mostly blood work though which was kind of a benefit. By the time I had made it to the Genetics Department I had a lot of testing done for the comorbid conditions and a lot of other conditions in general.

By the time I made it to the Genetics Department I was already diagnosed with POTS, Meniere’s Disease, Asthma, a Heart Murmur, Chronic Migraines and Fibromyalgia. That is a decent sized bulk of my diagnoses, but now people take me seriously and it’s good to finally have answers. Over the years though I’ve seen so many doctors I couldn’t keep them all straight when I was younger.