What Being a Spoonie Means to Me 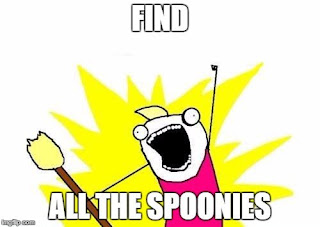 The overall general definition of a Spoonie, is someone who has a chronic illness that uses the Spoon Theory as a way to explain the amount of energy that they have.
To me being a Spoonie is that and more. It’s like being part of a family that you might not have known existed at one point.

Generally when you first get diagnosed with a chronic illness or multiple illnesses, it’s kind of isolating and upsetting. Eventually as reality sets in after the initial shock of diagnosis and you begin researching your illnesses, you learn if they’re rare or more common among others of the population. It just kind of goes from there, you find forums and discussion boards of people that have the same illness(es) as you. When you find others is that magic moment where it all sinks in that everything isn’t just numbers and statistics, that you are a part of this big weird kind of family.

And one way or another, most people stumble upon the spoon theory. Maybe hearing about it from friends or family that are also sick, a blog post like mine, a meme, a podcast, it’s the internet, really the possibilities are absolutely endless. When I first stumbled upon the term ‘Spoonie’, it was when I was on bed rest during a particularly long stint of steroids. I was on Pinterest and I discovered the Chronic Illness Cat meme and it all just went from there.

I found groups and communities of Spoonies on social media and it felt like home, having people that understood my struggles of being sick that I didn’t have to justify myself to. Finding my way into the Spoonie community has given me some of my dearest friends and I’m forever grateful for them.

So overall, to me, being a Spoonie means having a family at every turn when you need someone to just simply understand a certain disease struggle that you’re going through. Being in the community means you always have an army of friends that have your back when things get really rough. It’s a family that doesn’t judge you on your current place in life. And they definitely don’t judge you on your hospital horror stories or your medical devices like healthy people might do. So being a Spoonie also means complete acceptance and no judgment.

It also means having guidance, especially when you have a tentative diagnosis. I’ve talked to so, so many people that have been willing to help me throughout my current struggles with malnutrition due to my Gastroparesis. I’ve felt so much better having so many people to talk to that have walked my path before. Being chronically ill is awful, but I think the universe makes up for our illnesses by giving us friends that become family.