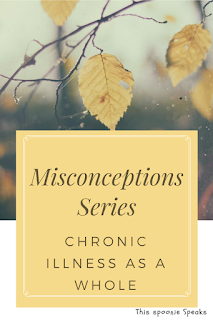 Hi everyone! So this is the first post in my Misconceptions series, for this post I’ll be talking about chronic illness misconceptions as a whole. Then I will progress through my illnesses and I’ll be having a guest post or two along the way as well. These posts are really anyone who wants to learn about chronic illness. Though I really hope that my posts reach caretakers, or those who are waiting for a diagnosis. I’m aiming to clear up these misconceptions to the best of my ability, so here we go!

No, actually I’m not lucky. Nor is anyone else I know with chronic illness. We really do want to do things, we just aren’t able to. Though staying home all the time isn’t the picnic people think it is. There’s still a house to run, cleaning, laundry, cooking, most of us still try to do mundane tasks if we’re able. I want to be able to do things but that isn’t plausible right now. And even though we’re at home we still have to take care of ourselves and take our medicines that slowly destroy our bodies in hopes that our conditions can be helped.

If anyone with a chronic illness says they’re busy it would be good if people accepted it instead of questioning it. There are doctor appointments to attend, medication schedules to follow. For example I have to give myself Humira injections every other week to control one of my autoimmune conditions. A side effect of that for me is drowsiness and I need to sleep for awhile until my body regulates itself.

There are also other things to do, one being arguing with the insurance company. When you’re ill often times it seems like you’re in a constant state of battling with them. Often times we have to fight for scan, medications or medical supplies that we need to go about our lives. There’s also the pharmacy, you’ll be in plenty of fights with them as well. They might not have medications you need and then you may have to call every pharmacy in your town to see if anyone has it. So really what we do is argue with people all the time, frankly it gets really annoying if you have to have the same argument over and over again. 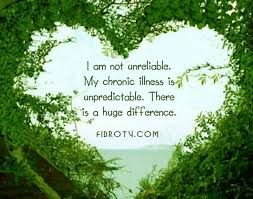 Making plans when you’re chronically ill is an art form, it requires a lot of planning. We need to get extra sleep, to make sure we are even rested enough to contemplate leaving the house. We have to watch what we do on the days leading up to the plans, we have to be careful no to injure ourselves or do anything to make our pain flare up. But just like normal people we are imperfect, we forget about other things we might have to do. We could forget about doctor appointments or physical therapy, really it’s a laundry list of things we have to be careful about.

We don’t mean to cancel plans but being chronically ill means our bodies are unpredictable. One day we can be fine and have a low pain/fatigue day and then the next we’re too sick to do anything. We want to go out and see our friends or even do something as mundane as grocery shopping. We’re sorry that we seem so odd and flaky because of our tendency to cancel plans suddenly. But please don’t stop asking if we want to do something, we want to do things and eventually it will all work out. We all just need to be patient and eventually it’ll all work out.

The obvious answer is no we’re not a junkies, it can’t really be helped that almost all of us need to take medicine while we’re out since we’ve actually managed to make it out of the house. The medicine we take keeps us alive and comfortable. Usually the only reason it seems like we take an excessive amount of medication is because others usually don’t see us take out medication when we need to. If you sat at home with us you would eventually become desensitized to it. It’s just another part of our lives. If you really want to know about our medications, the easiest thing to do is just ask.

This is partly right and partly wrong, while I suppose it might be easier to sleep at night if we didn’t take a nap but it’s just unavoidable. When you’re chronically ill, one of the most common symptoms is fatigue. One of the most common side effects of medications are drowsiness, and if we take multiple medications that cause drowsiness, taking a nap is inevitable. But sleep is when the body heals, and if we’re relaxed medications seem to work better as well. Overall we’re going to do what’s best for our body no matter what, judgment or not.
Labels: awareness chronic illness education misconceptions misconceptions series spoonie this spoonie speaks