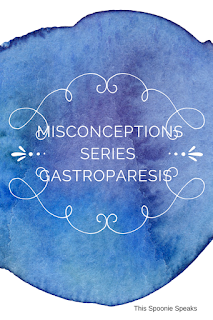 This week in my Misconceptions Series I’ll be talking about Gastroparesis. So let’s start off with what Gastroparesis is, it translates literally to stomach paralysis. It’s also called delayed stomach emptying. 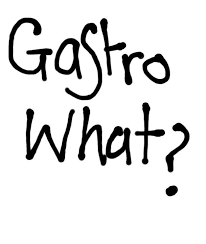 So overall that means if I eat something it could get stuck in m stomach for days and not be digested at all. It leads to chronic nausea, vomiting, weight gain or weight loss, feeling bloated, feeling full quickly and malnutrition. Though this is just a sample of what we could go through but there can be any number of symptoms. My stomach doctor has also told me that your chance for getting/having Gastroparesis is higher if you also have Postural Orthostatic Tachycardia Syndrome (POTS).

I got diagnosed with this last September/October, though because I have Ehlers-Danlos Syndrome (EDS) it’s likely that I’ve had Gastroparesis for my entire life to some degree. Though because I didn’t receive my EDS diagnosis until recently, none of the doctors I’ve seen ever thought to look for it as well as the fact that Gastroparesis is a rare disease.

When I originally got my diagnosis it was “mild” and was able to be kept under control by several different medications. As of recently though my Gastroparesis has gotten to be rather severe. Severe enough that my doctor has urged me to consider getting a feeding tube so I can get nutrients into my body.

Also August is actually Gastroparesis Awareness Month. So this month we go green and hope we can make people more aware of our rare condition. Though even so for us everyday, and every month is Gastroparesis awareness because these disease is so debilitating.

Now onto the misconceptions!

No Gastroparesis isn’t any sort of secret fad diet that we do to lose weight. It’s a legitimate disease that has severely impacted my health. I can’t eat and I throw up a lot because of this. My body doesn’t absorb nutrients like normal either. This has all lead to massive declines in my weight, which is how I’ve come to understand that people think my illness is a “super diet” of sorts. But as my weight has declined so has my energy and my overall ability to function, some days I hardly have the energy to sit up.

No I’m not happy, the amount of weight that I’ve lost is dangerous. And as I’ve said before I lose weight because I cant keep food down. Though just because you see me eat something doesn’t mean it’s actually going to stay on my stomach. Losing this much weight actually means that I’m malnourished. And my weight is below my compromised lowest weight that my doctor agreed on as well. Being malnourished is awful you have no energy for anything, even more so than just your basic chronic illness related fatigue.

I do throw up and quite often at that. I don’t really like to see the pitying looks people give me if they see or hear me get sick. I do everything I can to appear as normal as possible, it’s really so I can maintain some dignity. When you get to be manhandled by doctors all the time you do lose dignity, I just get poked and prodded like a lab rat all the time.

Sometimes mentally it’s hard for me to grasp that my dignity has basically been destroyed by Gastroparesis, as well as all the other illnesses I have to deal with. So what you do and don’t see doesn’t really mean much, I just want to pretend I’m normal for a few hours and I ask you at least give me that much.

While that seems like the most obvious straightforward thing to do it’s still harder than that. As I said before when I eat that means food can stay stuck in my stomach for a really long time. So really eating is sort of counter productive for me to do. Also I very rarely feel actual hunger, so that makes it really difficult to eat as well.

And if I ate food that means it would have to get processed and absorbed, which means my body would be trying to do something that it hasn’t done correctly in a very long time. Food really feels like cement blocks just sitting in my stomach for days and it leaves me feeling bloated and miserable. Just imagine if you tried to eat Thanksgiving everyday and how awful that would feel, constantly feeling so full your stomach might pop like a balloon.

5.     Gastroparesis must just be an eating disorder then.

I have spent probably all my life with Gastroparesis and there have been times where doctors have thought that I’ve had some sort of combination of Anorexia and Bulimia. Those doctors made me feel like everything was all my fault; I spent years and years doubting myself and my symptoms. Though when I turned 18 and started having almost complete say in my medical care, doctors finally started listening to me more. I wasn’t a “kid making up symptoms to get attention” anymore.

I hear this a lot from people honestly because they don’t understand that my stomach just simply doesn’t work right. And it has put a bit of a strain on myself and my relationships. In the beginning before I really understood what was going on with me a lot of people had an eating disorder, but now I can actually explain to people what’s wrong with me and how my stomach actually works compared to the average person.

So while Gastroparesis does seem similar to Anorexia and Bulimia, it isn’t a eating disorder. It is a disease that I have to fight everyday to the best of my ability. Even though it’s taken so much from me, I still try to have hope and even more hope that one day we’ll have a cure for this awful disease so we can live somewhat normally again.

Thoughts, Facts and Tips About Gastroparesis

2.     When you have Gastroparesis you learn real fast that you should carry a toothbrush and all that with you in case you get sick while out in public.

3.     I’m apprehensive to talk about my Gastroparesis to new people, mainly because I’m afraid they’ll jump to the conclusions I’ve mentioned above.

4.     Don’t ask me how it works, but sniffing alcohol wipes or a bottle of rubbing alcohol helps with nausea.

5.     Just because someone you know with Gastroparesis doesn’t act, or have the exact symptoms of something you read on the internet doesn’t mean they’re faking.

6.     Overall we just want to be believed, loved and accepted like any other person. Most of us are just afraid of being judged by others.

7.     The best thing that a friend or caretaker can do for us is just listen to us and believe what we’re saying. Often times there’s still a lot more going on than what we generally describe or talk about.

8.     Please know that we do feel guilt like any other person with a chronic illness, that we can’t do things normally or have a normal life. And that all of this is a heavy burden to deal with.

9.     As I’ve started navigating the world of soft and liquid foods, the best options I have are nutritional drinks like Ensure. And I also eat baby food as well, sounds kind of stupid I know, but it’s something that my stomach can mostly deal with.

10. Friends please don’t stop inviting us to do things, because one day all the planning will work out. You are our bit of normal in this dark world of doctor appointments and hospital stays. You’re like the light at the end of the tunnel.


Everyday is a fight, but everyday will also hope for a cure. I will never stop hoping for a cure, one day we'll have one. Maybe not in this lifetime, but I can hope that maybe future generations won't have to struggle with this awful disease. 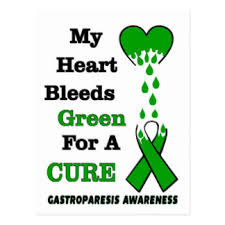