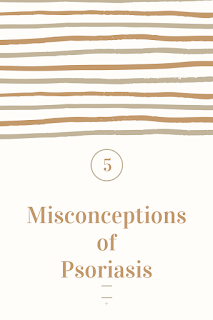 No, Psoriasis is a chronic genetic, autoimmune skin condition. It’s a condition that affects roughly 7.5 million people in the U.S. It occurs because our skin cell turnover happens too quickly thanks to our overactive immune system. Other problems with Psoriasis are redness and inflammation, along with the dry patches of skin that people notice most often.

No, Psoriasis isn’t contagious and it can’t harm others in any way. It’s an autoimmune condition so that means our body is attacking itself. Again it’s characterized by excessive skin cell turnover. In healthy people skin cell turn over happens every 28-30 days. While with people who have Psoriasis the process happens over 3-5 days. So any patches of dry skin, redness or scarring are completely harmless to everyone. You could touch a plaque area and you wouldn’t experience any ill effects, but we’d prefer you attempt not to touch them because they can be incredibly painful.

3.     Why are you so paranoid about others being sick?

Those of us with any autoimmune disease are often very paranoid about getting sick. And we will go to great lengths to make sure that we don’t get sick. Many of us have to take any variety of special medications to lower our immune system. With the immune system being lower, we’re incredibly susceptible to germs And getting sick while having a lowered immune system can sometimes mean a death sentence. Though I have a special mask that I wear called a VogMask, it filters out germs and allergens so I can go to places like the mall or grocery store. 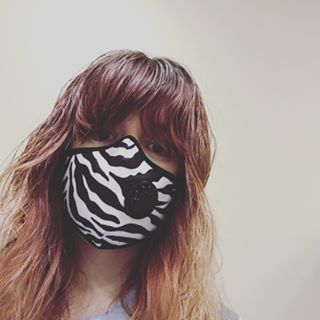 There are OTC lotions geared toward those of us with psoriasis and for some with mild Psoriasis those lotions can be very helpful. But in the end, most cases of Psoriasis require more treatment by a Dermatologist. Though treatment for Psoriasis  can be as simple as a steroid cream all the way up to injections and infusions of medications to suppress the immune system.

5.     Getting a diagnosis seems simple, the symptoms seem straightforward.

I can’t speak for anyone else but it took me several months to get the appropriate diagnosis and treatment. Originally it was just a dry spot on the bottom of my foot and the dermatologist thought it was eczema. They gave me a few different creams to try to see if it would go away and it didn’t. After several more attempts of treatment, my Dermatologist decided to test me for Psoriasis. That involved doing a hole punch biopsy on the palm of my hand where most of my Psoriasis was at the time. While we were waiting on the biopsy results I also got tested for Lupus. So far the testing for that has remained negative thankfully. Then after about a month or so the biopsy results came back as positive for Psoriasis.

In other news on Friday (9/1/17), I went to see a Rheumatologist at the request of my Dermatologist because she thinks I have some other autoimmune illness that we haven’t discovered yet. And I agree with her, I’ve been sicker over the last few months than usual, and more fatigued.

The Rheumatologist did a physical exam, testing my joints and poking at trigger points for Fibromyalgia. He looked at the active spots of Psoriasis on my body as well. He thinks I’m a good candidate to try to take Otezla as long as I don’t experience any Stomach or Psychiatric problems. He also gave me some sort of ear drops to use because I have Psoriasis in my ears. 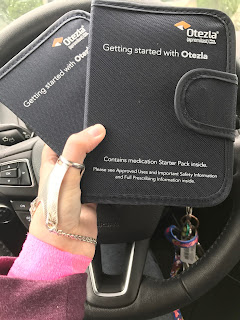 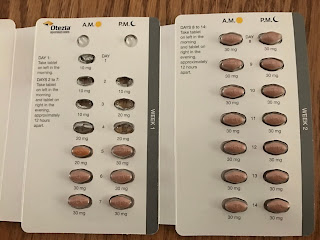 This is what the Otezla looks like and it reminds me of a steroid pack. But you're upping the dose slowly so you don't experience any ill side effects. The most concerned side effects being stomach and psychiatric problems.

And on the GI front my doctor has submitted the paperwork for me to go to the Cleveland Clinic to have their opinion on my Gastroparesis. I’m actually really nervous about it all, but I’m hoping that they will agree to my request of getting a port and learning how to do infusions at home when I need them. Because as it gets closer to me graduating and becoming a Pharmacy Tech, I won’t have that convenience of being able to just go to the infusion center whenever they have an open slot for me.

The type of infusion I usually require are just regular saline, but here recently I’ve been getting vitamins in my infusions as well. I was in nursing school so I do know how to do all the things that would need to be done to do these infusions. So we’ll see, but I don’t even know when my appointment is going to be.
Labels: awareness chronic illness life update misconceptions misconceptions series psoriasis spoonie