My Misadventures with Otezla 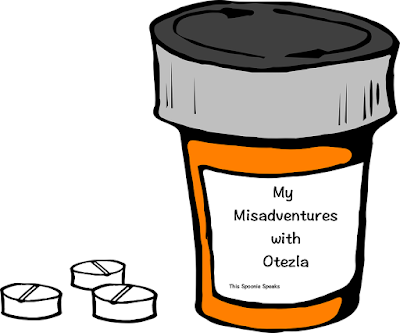 I had my first appointment with my Rheumatologist on the first of this month. My Psoriasis is still uncontrolled; this means I still have very active lesions in my ears as well as a flare starting on my hands. But having a never-ending flare in my ears means that I can’t wear my hearing aid. This has all been pretty difficult also considering I think I’m losing my hearing in my “good” ear. So my Rheumatologist thought it would be a good idea to add Otezla along with my Humira. Turns out that was a very bad idea.

The two main areas of concerning side effects according to my doctor are Gastrointestinal and Psychiatric. In the first couple days my stomach only hurt. And that’s really no big deal; my stomach generally always hurts to some degree.

Once I made it up to the 30mg pills I started experiencing weird/psychiatric side effects, it began with sleepwalking. The first time I woke up in my closet with several shirts on at once. Another time I woke up in my bathtub and the last incident I woke up standing in front of my hedgehog’s cage. The sleepwalking didn’t alarm me too much because I didn’t hurt myself just bruises from bumping into furniture.

The most concerning thing was one day I woke up incredibly confused and disoriented. I thought I was waking up from a nap, but no it was a whole new day. I don’t remember going to bed either. I couldn’t process what time it was when I looked at my phone either. What was the most frightening was the first few minutes when I woke up I couldn’t move. And I had no idea where I was even though I was in my room. It was the weekend when this incident happened so I called my Rheumatologist office on Monday and they told me to stop taking the Otezla.

I stopped taking the Otezla that day and thankfully the worrying side effects went away after a few days. Though I am still having a few problems with memory lapses and confusion. I talked to my doctor about it on Tuesday (9/19) and he said it should resolve itself soon.

Now while those were the most prominent and concerning side effects I did encounter a couple others as well.

-I was tired all the time no matter what I did when the Otezla kicked in I would fall back asleep if I was at home or really anywhere with a flat surface to lay on. But I feel like if I as able to continue taking it the fatigue would’ve gone away on its own.

-It interfered with my heart medicine; I take Propranolol to control my Tachycardia from my POTS. So with my Tachycardia running rampant my POTS was uncontrolled. That left me with even more fatigue from my heart rate staying as high as 130. So I was having a lot more pre-syncope and total syncope, I almost passed out in the middle of Whole Foods.
-I also had blurry vision at random intervals, but it was never constant for an extended period of time.

So that’s the extent of my misadventures with Otezla, I was honestly not expecting this to happen. This is probably the worst reaction I’ve had to a medication in a long time. And it was really scary to feel like I was going completely crazy and I didn’t know what to do with myself even though I knew it was the side effects of the Otezla. So if you get put on it I would suggest proceeding with caution, write down any symptoms you experience and talk to your doctor.