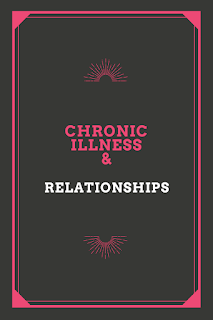 In my experience having relationships when you’re chronically ill is really difficult. When you first become friends with someone it’s always about hiding those wayward edges of chronic illness. They tend to stick up randomly like bits of hair; It’s a pill bottle here or a medicine alarm there.

Honestly when I start trying to make friends that aren’t chronically ill I try to put the “pre-illness” me forward. The one who didn’t need twenty pills a day to keep her organ systems in order, that didn’t need infusions of fluids and vitamins. But I can only keep up with that shiny happy act for so long; underneath the cheerful façade is still a tired Spoonie. And eating, we can’t forget eating. I’ll try to force down as much food as I can despite the fact I know that I’ll most likely be really sick later.

And perhaps after a few months I might open a pill bottle in front of someone, but pass it off as antibiotics. It’s a totally believable lie, I get infections so often it’s like I should be on them constantly anyway. Or they could hear my Fitbit buzzing to tell me it’s time to take my afternoon medications.

It’s a series of baby steps, reading people and their reactions. Do they seem alarmed by the presence of a pill bottle? Do they wonder about the everyday buzzing of my Fitbit? Do they appear to be genuinely concerned? Do they notice that I don’t eat much food, that I generally just push it around to make it look like I’ve eaten? Do they notice I rarely drive in winter? Or stumble around in the snow like I’m drunk?

All of these things run through my head one bit at a time. I want to try to read how they genuinely feel with some of my most common actions. Some would say that it’s better to just be straight with people. To me I feel like that’s either more of a general preference or you just know that the person has pieced together that there might be something wrong with you to some degree.

I’m either straight with people or I break them in slowly, learning about life with chronic illness is definitely not for the faint of heart. Some healthy people take to being a part of this life because there’s no other option. Others take things in stride and genuinely want to learn about you and your illnesses. And remember though we may be chronically ill, we’re still teachers we all have the ability to teach others about the way we have to live our lives. And lastly (and generally most common) is we get rejected by those we thought loved us, be it a family member, friend or significant other.

I have been mainly, rejected because I am as ill as I am. People in there 20’s, all they want to do is drink and party. My definition of a party is take a bath with a bath bomb before bed. I have few friends in real life, but the ones I do have treat me like family and I do the same for them. Though sometimes I feel others have gone away from me because A.) I’m just too sick for them to deal with or B.) because I was mentally abused by my ex boyfriend it has left me with so much emotional backlash that I’m honestly not sure who really is my friend or not.

So obviously with this entire  thing going on it’s taken me quite a long time to figure out who’s genuine and who is fake. For example I was talking to a guy for several months, we met up and walked around and we discovered a guy smoking a cigar. I have asthma and any strong smells usually set off an asthma attack which it did, I was coughing and wheezing like crazy until I was able to locate my inhaler in my bag. After that he didn’t talk to me for a very long time and honestly still hasn’t. From this, I learned that if someone can’t even handle a simple asthma attack then they don’t deserve to be in my life at all.

It really seems like a dumb thing to never talk to some one again because that had an asthma attack. When it’s something you completely can’t control, it almost seems cruel to kind of leading someone on for the rest of the day. I find it to be quite annoying and incredibly rude to do that to someone. Mainly because I am one of those people that will be with you through thick or thin. But the minute you think that you can just use me for your own personal gain, I will let you see how fast I go from happy to bitch.

I’ve had people tell me I’m a burden that I should just die. Or that the world would be better off without me in it. That all I’d do is hold whomever I was with back and only cause them more trouble than anything else. I’ve also been told that sometimes people only like being around me because I’m like some sort of science experiment.

My chronic illnesses have ruined a lot of relationships and a lot of friendships. Many of my previous friends no longer speak to me, though it’s probably for the best. I probably am better off without them entirely. I’ve learned to live with very few ‘in real life’ friends simply because I just can’t handle watching them all eating and drinking. I just keep feeling immensely like I don’t belong at all no matter how hard I try. And after I had to drop nursing school the friends I thought all the friends I made there didn’t stick around much either.

But online friends they always have your back at almost any time of the day because none of us really get adequate sleep. But just as an example none of my online friends have ever hurt me, we don’t fight. We understand each other because those of us who have the same illnesses stick together. In general those of us who are sick no matter what the illness stay together.

I suppose you could say that having just friends is the easiest thing. But the hard part is having real relationships. Having a significant other when you’re chronically ill is one of the most difficult things I’ve had to deal with. I’m afraid of rejection, as any other person would be. Significant others is just hard, you don’t know when the right time is to let other people see that part of yourself.

Here and there I’ve found that it’s best to just be out with it and as upfront as possible. But for other people that’s not something you can just blurt out freely. I suppose it could be something you could bring them into slowly, maybe diagnosis by diagnosis? Though if you have a lot of diagnoses like me that’s going to take a pretty long while. But there’s always a way I suppose. And maybe I just haven’t found the right way to explain all this. I tend to go about things all wrong. I feel like everything I’ve done so far has been all wrong, but that’s something you’ve got to deal with when you’re chronically ill too. One day I hope to feel like I’ve done something right and maybe like I’ve helped a lot of people.
Labels: awareness chronic illness my thoughts relationships spoonie spoonie life this spoonie speaks