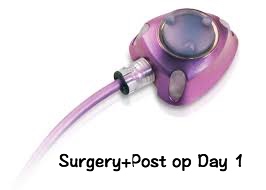 So as some of you may know or those of you who follow me on Instagram know that I've been receiving infusions for my chronic dehydration from my Gastroparesis. Well I also have very poor veins, nurses cringe a little when they try to look for a vein on me. And that accompanied with my continual weight loss finally prompted my GI to agree to port placement. It's been over a year if not two years that I've been trying to get a port, but at least it finally happened. And where we'll go from here I'm not sure, just gotta keep me hydrated and hope for the best.

So in general I’m not remotely used to being fully coherent when going into the operating/radiology area, honestly it really really freaked me out. And it took three doses of medication to get me comfortably sedated enough that I fell asleep. Honestly after the first dose of medicine I only got a little sleepy, I’m used to people putting stuff in my iv and then two minutes later I’m out like a light. When I didn’t immediately fall asleep or get really loopy I panicked a bit, my heart rate skyrocketed to 145. I was afraid that the lidocaine they gave me wouldn’t work and I’d be able to feel them cutting into me. Thankfully it did work, but I think they may have kept injecting me with it throughout the surgery. There were a few times I was vaguely awake but all I felt was pressure and tugging which was so weird.

This actually makes surgery number seven for me so I’m no stranger to any of this; this was just my first surgery without general anesthesia. Though surgery seems less terrifying with general anesthesia because you know that you probably aren’t going to wake up during surgery and everything. Just all in all I survived and for once my vitals remained stable in post op. Generally I end up with tachycardia and low oxygen levels after surgery.

Though the reason I was scared about not going under general anesthesia and all that is because of my Ehlers Danlos Syndrome. It causes me to metabolize sedatives, pain medicine and numbing medicines more quickly than the average healthy person. One of my biggest fears is that during one of my surgeries I’ll wake up from sedation and feel the doctors cutting into me and I will be able to feel everything they’re doing to me.

So today (1/17/18) is my first day post op for my port and I must say this hurts a lot more than I originally thought it would. But I did get to take my big surgical dressing off, so all I have are three steri strips keeping my incision together while it heals, those should fall off eventually. I’ve been dealing with the pain with pain medicine and my trusty ice pack that I got at the hospital. Generally my body doesn’t like cold therapy to help with pain so I was quite surprised in post op that it helped with the pain. 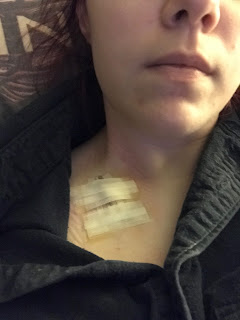 I’m just trying to take it easy, but most of the time I’m probably stressing about who/what is doing what in terms of my home health stuff. I currently receive infusions of saline and potassium at one of my local infusion centers, so I won't have issues with dehydration while everything is getting switched over to home health. I'm excited that I'm able to do home health, I'm tired of spending so much time in the hospital. I mean they take excellent care of me but my banana bags that I'll be starting will infuse for six hours instead of my current potassium/saline infusion rate of 250mL/hr which takes a little over four hours. I have a social worker and a nurse, currently they're trying to scrape together prescriptions for me. they said I don't have to do anything except heal snd feel better.