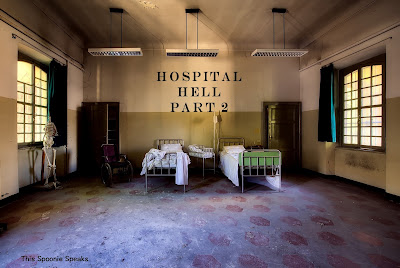 So I got put on the surgery docket for Friday, it was stressful experience. So I spent my Thursday hooked up to continuous oxygen, I wasn’t hypoxic or anything, I just recover better from anesthesia if I’m really oxygenated. I honestly have no idea why that works but it works and I’m not going to complain. 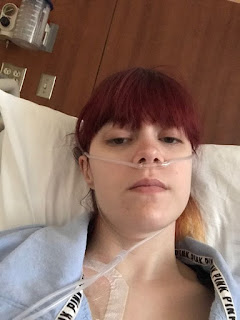 I got my tube placed thus making it my 8th surgery, and I was recovering okay enough. Though I get really angry when the nurses keep telling me to wake up and not let me just sleep off all the meds. Honestly I was unprepared for the hell that I woke up to. It felt like they shoved a garden hose into my nose and I discovered that I have a string looped around my septum in an attempt to help keep my tube in place. I hate this awful stupid string very much, especially since my nose is so freaking runny I want to scream. The string is honestly like having a wet noodle stuck on my face all the time.

I was also yelling that I’m in pain because it honestly felt like someone punched me in the face. And they asked me if I wanted Tylenol instead of my stronger prescription medication. Trying to use Tylenol for this pain is like is like using a squirt gun on a forest fire. I mostly complained about the pain and some really bad nausea, so they gave me oral Zofran, which I think was really stupid to do when someone is that nauseous. They also asked me to rate my nausea like how they ask you to rate your pain, which was super weird to me.

I vaguely remember the x-ray people coming in to take a shot to make sure my tube is sitting in the correct part of my intestine. I was really groggy for a while so my memories aren’t exactly clear, but my parents left to go home eventually and then I started uncontrollably throwing up. It was a bunch of stomach acid and mucus from my nose it was awful. I threw up for three or more hours straight, kind of hard to tell what time it is when you have your head in a bucket. The nurse wasn’t helping me at all and she just sat there and watched me throw up. My roommate was a very nice older lady she came over and sat with me while I was sick and I ended up giving her my phone to call my mom so my mom could tell the nurse what medicines to give me. After what felt like an eternity they finally gave me IV Zofran through my port and I was able to stop being sick. In my opinion I’m classifying it as a allergic reaction to one of the medications they gave me to go asleep to place my tube.

But I was screaming and crying, yelling at my nurse to take my tube out because that’s the only conclusion my brain could come to at the time. But I got better and I nodded off for a bit, though I was still really mad that no one really seemed like they wanted to help me. They had hung my first bottle of formula last night after they were sure I wasn’t going to keep throwing up.

My cramps and discomfort were really severe and the nurses were pushing me really hard and fast to get to goal rate, which was miserable. I had to keep asking for breaks because I’d get really nauseous or the intestinal cramps would get really bad. The nurses were really unhappy about it, but they gave me a break until I fell asleep then very carefully hooked me back up which I was honestly really grateful for.

Though at one point I just completely stalled out on increasing my feed rate for a while. I made it up to 45ml/hr but going higher was just a pain, I was stuck at 45ml/hr for a day or two I think. And I got cleared by Physical Therapy to walk the halls on my own which was nice I wasn’t a fan of being in my room all day. I was and am still tired but I’ve been able to successfully do more and I’m happy with that.

I went walking around the floor with my mom for some exercise and I had a really weird pump malfunction. But it could be common, I’m not sure. Since I was in the hospital I was getting those giant 24 hour bottles of formula. For some reason I was getting a ton of air in my line even though there was still plenty of formula in the bottle of feed. So my pump starts freaking out telling me there’s air and everything in my line so we went over to the nurses station and asked for help. They weren’t helpful at all and I was really upset, when I walked up with my pump beeping like crazy they just stared at me.

I honestly thought no one was going to help me at all, but my nurse that was assigned to me was really busy. So one of the nurses decided to help me, even though she looked like she didn’t really want to. We re-primed my line and then they hooked me back up so I could keep walking around. A few minutes later it then started happening again, though we did find my nurse in the hallway and she hooked me up to a new bottle of formula. Then my pump glitched out so in the end my nurse also got me a new pump as well.

Then Monday night the nurses started saying that I’d be coming home on Tuesday, which I was so happy about. I really was going crazy from being in there. I was so happy telling everyone what was happening. But on Tuesday after I woke up from a nap, they said they couldn’t send me home. Things went wrong with sending my prescriptions for my supplies to my home health company. I was so upset; I was ready to go ballistic on someone. Though I finally was able to go home on Wednesday, meaning I was in the hospital for a week. And I looked over my discharge forms and I got two new diagnoses Failure to Thrive and Severe protein Calorie Deficiency.