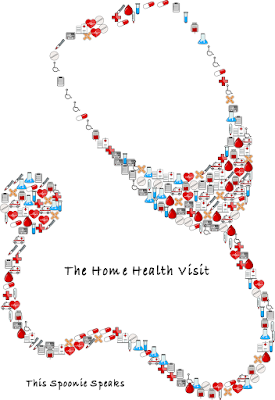 So I held off on making my home health visit post, mainly because I’ve been processing some things from that visit.

The nurse that came was super nice and listened to everything I had to say, though there was a lot of things that I ended up not knowing. If you know me, you know I’m not exactly fond of being totally clueless about my medical care. I did learn that if I signed my Home Health contract, I’d no longer be able to attend my infusions at the hospital. And one of the problems I did know about is that’d I’d only be receiving on infusion a week through Home Health. My doctor seems to suddenly think that I’m well enough to only receive only infusion a week, instead of the three that I currently receive at my hospital’s infusion center. The nurse tried to call my doctor’s office to see if she could change his mind so that he might allow me three infusions.

All my nurse got was a snappish answer from his assistant that he was completely against me receiving three infusions a week. I also have no idea why he’s saying no, all I keep hearing is no and I’m not getting an answer as to why he keeps saying no, no matter how much I ask. At one point I was sitting there crying asking why it seemed like my doctors wanted me to get really sick before anyone would help me appropriately. I tried to stay strong and not freak out in front of the nurse but I just couldn't. I broke down and kind of lost my mind a little bit, I'm not going to lie this showed me that I do need to find a different local GI or trust that my Cleveland Clinic doctor can set me up with a good respectful doctor.

There was also a paper that said that IV Zofran was also ordered for me, which I actually didn’t have. So that was another series of questions for my doctor’s office, they said that they had denied my request for it. And they said I’d be okay with just oral Zofran, which was pretty annoying. So essentially to me it felt like my doctors office wanted me to back track, health/hydration wise. I am not willing to do that, though I do have to admit that I did contemplate it for a moment.

I think it’s stupid that I have to get sicker before anyone will believe that I need more things to sustain my life. In general since I started getting sicker the less my GI here at home wants anything to do with me. Honestly my doctor and his assistant haven’t been treating me well, since my doctor had to take a lot of time off last year because he needed shoulder surgery for whatever reason. I’m not naming names, I’m just not nearly as comfortable with him as I was in the beginning honestly.

We also tried to call my GI at Cleveland clinic to see if he’d sponsor my prescription for three times a week infusions. Unfortunately in the end he said no, but he did say that he would find me a doctor, that is a part of Cleveland Clinic, who would give me what I need. So that does honestly give me a little bit of hope that someone might actually help me.

I don’t remember if I included this in my last post, but I called my GI doctor at Cleveland Clinic before I even talked to Home Health, because I just needed to go in. Though it’s quite a trek for my dad, and me because he’s the one who drives, because I can’t drive that far. I talked to my doctor’s nurse about my dwindling health, weight loss, inability to eat enough to sustain my weight and overall life functions. I’ve been really weak and unable to do a whole lot of anything since I’m not eating, honestly I sleep a lot of the time.

His nurse said that I should probably expect to be put on TPN in the near future in an attempt to get me nutrients that my body needs. TPN scares me a little because it can have some pretty nasty side effects, but at the same time I have a little bit of light at the end of my tunnel. Mainly that I’ll get calories and nutrients that I need and I won’t have to worry as much about trying to eat as much food as I possibly can. I also know that doing things while on TPN will be a bit of a life change but, I honestly feel like I’m ready for a change.

In the end with all the above factors considered, I actually didn’t sign my Home Health contract. I’ve made so much progress with my three times a week infusions, my potassium level has been going up. Which that in itself is a miracle, because usually my Potassium level is really low bordering on having not enough Potassium. I’m honestly holding out hope that we can get things set up to where I can start TPN as soon as possible. As well as being taught how to access my port all on my own, I don’t feel like I have a lot of control in my life right now. But if I could at least access my port on my own I would honestly feel a bit better. So we’ll see what becomes of my Cleveland Clinic visit it’s on 2/14/18, stay tuned for that update at some point.

Since this is all pretty important I will try to keep you guys updated either here or on Instagram.
Labels: chronic illness cleveland clinic gastroparesis GI problems home health spoonie spoonie life this spoonie speaks TPN