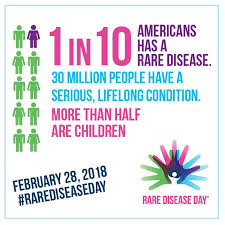 Gastroparesis literally translates to stomach paralysis. My stomach is paralyzed, meaning I don’t digest food and absorb nutrients well. Food basically just sits in my stomach and does nothing and then I get really sick. I’m also always nauseous because of this illness it’s like permanently having the stomach flu. My Gastroparesis is caused by my rare genetic condition called EDS or Ehlers Danlos Syndrome. It causes my collagen to be made differently meaning I’m very flexible in very weird ways and my organs and skin are very stretchy.

Gatroparesis affects more than 1.5 million Americans, with approximately 100,000 suffering from a severe form of the disorder. Standard medical therapy fails to relieve symptoms in approximately 30,000 of these patients.
(https://digestive.templehealth.org/content/Gastroparesis.htm)

I have severe Gastroparesis and I’ve been officially diagnosed for a few years now. I’ve tried every type of treatment my GI doctor would allow, I am one of the 30,000 people that standard treatment failed.

-I take three different anti nausea medications to just manage my ever-present nausea.
-I’ve tried Reglan and Domperidone. The Reglan causes neurological side effects that may become permanent if I take too much of it. The Domperidone worked for a few months and then it just stopped working for whatever reason.
-I’m allergic to Erythromycin, so that’s not even an option because I would go into anaphylactic shock.
-I changed the way I eat. I cut back on sugar, didn’t eat any raw veggies either. I had to stop eating meat because it was particularly difficult for me to keep down. I tried to eat as much soft foods as I could get to see if that would be easier and that didn’t work. Then I switched to an all-liquid diet and that didn’t work either.
-I took many different kinds of vitamins in a attempt to manage my symptoms like ginger, licorice root among others including a lot of your standard vitamins in a attempt to ward off vitamin deficiency.
-I’m also not a candidate for a gastric pacemaker

I also declined to have a newer procedure that involves getting your Pyloris (a muscle in your stomach) cut. Once that muscle gets cut it’s supposed to increase gastric emptying. It’s such a new procedure, that after weighing my options I decided to hold off until it becomes more common to have it done and see what the statistics are at a later time.

I’m not going to put this lightly, it has destroyed my life, I can’t do half the things I used to be able to. It’s come to the point where I can’t sustain myself on my own. I was eating less than five hundred calories and drinking less than a liter of water in a day. I realize that may be better than what other people can do, but this was going on for many months. Leading me to become chronically dehydrated and deficient in most vitamins, but especially potassium. I’ve always had a very difficult time absorbing potassium.

So all varieties of treatments have failed me, it’s pretty much gotten to the point where, we’re just trying to preserve my functioning. On Valentine’s Day after my Doctor appointment that I had at Cleveland Clinic I was admitted to the hospital by my doctor to have a feeding tube placed. I got my feeding tube placed two days later and I am eternally grateful that I am now able to function a little bit better because I have this tool. On the days when I’m really sick and not able to eat I don’t have to stress so much about trying to force something down. 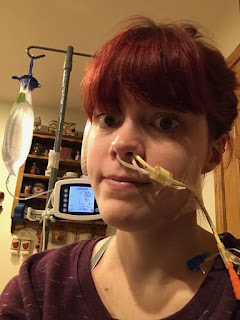 In the hospital I received many infusions of vitamins to normalize my levels. I was also diagnosed with the adult version of Failure to Thrive, Malnourishment and Severe Protein-Calorie Deficiency. I have a feeding tube called an NJ tube meaning it goes from my nose all the way down to my Jejunum, part of my small intestine. It currently and most likely will always provide me with 100% of my vitamins and nutrients. Gastroparesis needs more awareness because we need more treatment options.

While Gastroparesis is my most severe chronic illness, it isn’t the only rare illness I suffer with. I also have Meniere’s Deisease, a rare inner ear disorder, as well as Ehlers Danlos Syndrome which is a rare genetic connective tissue disorder.