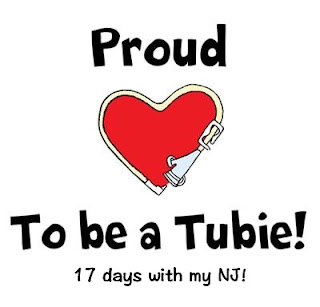 In my 17th day of having a feeding tube there have been so many ups, downs and stress. This has been such and adjustment; I honestly barely even know what to do with myself. This is the first actual post that I've written specifically about my NJ tube, I wanted to keep documentation of it all so I can look back and see how far I've come while on my tube feeds.

·      Home Health problems, when I was setting up the first time at home I got my supplies, but when we were looking through the boxes we discovered that they didn’t give me a pump
·      A sinus infection
·      A broken extension
·      Mini clogs
·      People staring at me
·      Not clamping my tube and accidentally letting air in
·      Being frustrated
·      Lack of sleep, you don’t know how hard it is to get completely comfortable and also be in a position that doesn’t kink your tube
·      Pump malfunctions, somehow my flush settings got erased in the middle of the night
·      Face pain! Yes this thing in my face causes me pain and I have nerve damage in my face from my Septoplasty that I had done several years ago, which makes my pain worse
·      Throat pain, this thing feels like it’s trying to rub a hole in the side of my throat constantly

There are more things I’ve survived but I don’t want anyone to get bored. So now we move on to something important. I can’t exactly remember if I told you guys or not but when I went to my follow up at Cleveland Clinic last week, I met a very nice doctor that actually gave a damn about me and my overall health. He did some of his rotations and things over at OSU. So since my GI doctor at Cleveland refused to provide me with a referral down to OSU, I contacted the fellow I met last week. He told me to call if I have any issues with my main doctor getting me a referral down to OSU.

At this point I’m just waiting and hoping for him to call back soon. I’m only supposed to have my NJ tube for two or three weeks, but here we are at day 17 and I’m feeling pretty anxious. Though I’m trying really hard to just be hopeful. I’m honestly just one big ball of anxiety because of my feeding tube, though I’m trying to focus on the good.

Honestly out of everything that bothers me, I think the worst things I’ve had to deal with are my extension set breaking, people staring at me and the mini clogs. No one warned me that the extension sets break, though I suppose I should’ve just assumed it. I called so many people about it and my home health company wasn’t sure what kind of extension I even had to begin with. It was super frustrating trying to get a new one. In the end I called my GI doctor up in Cleveland and after a lot of searching his nurse found me an extension and was able to send it to me via UPS.

Now some of you may be wondering why a few extra inches of tubing matters so much to me. Since the placement of my NJ tube I’ve been unable to take almost all my medicine orally. So I actually crush up most of my medicine and put it in water to put through my feeding tube. While it may mean a bit more work, it’s worth it to be able to properly digest my medicine instead of throwing it all up at some point. It also acts as a fail-safe in a way, because if something is going to make my tube clog it’ll probably clog the extension first instead of m actual tubing in my body.

And while this thinking has failed twice before, I still think that the general idea is probably the best thought process.

I also had major problems of people openly staring at me like I’m some sort of sideshow exhibit. The first incident, people stared at me openly because they don’t have any manners probably. My parents and I went out to eat (because I’m not NPO) and people just openly stared at me with their mouths hanging open. One person that was walking past our table stopped in his tracks and stared at me. And this was while I was looking directly at him, I don’t understand why people stare it’s so disrespectful. Look once then go about the rest of your day, I am a person; I have the same rights as everyone else even though I eat differently.

I also had a incident at a McDonalds on the way home from my follow up at Cleveland Clinic. There were a bunch of unruly teenagers in there and it was awful. It felt like the minute I walked in everyone started staring at me. In the end I hid in the other quiet area of McDonald’s. I kinda feel like the minute I started going outside with my tube I somehow became an alien.

And my god the mini clogs were so awful, but they generally stayed at the tip of my extension so they were an easy fix. One clog did make it into my actual tube inside of me while my extension was broken though. But my dad did manage to unclog it with a water flush, so that was a narrowly avoided hospital visit.

All in all having a feeding tube comes with it’s good times and bad times just like any other medical device. And even though I do get mad at my tube, I try to remind myself that this tube is keeping me alive. That if I didn’t have it, I would be very sick and malnourished still. And even though I am getting better I am still weak and have my days where I can’t do much. But I feel so much improvement already and I am so thankful for it.
Labels: feeding tube grateful life change nj tube spoonie spoonie life struggles this spoonie speaks tubie tubie life