So yesterday (3/23/18) I finally made it to my surgery consult appointment. This appointment was to discuss surgical placement for my more permanent feeding tube. I’ve been stressing about it since it got set up honestly, everything has been going wrong since I got my current NJ feeding tube.

The appointment was honestly harder on me than I thought it was going to be. We tried to explain the whole story about Cleveland Clinic being completely insane, but he didn’t really seem to care about any of that, to me it was fairly annoying. So my mom gave him the short version of all that stuff, enough to get the point across anyway. He also had me list off all my other medical conditions, which the list is rather extensive at this point. He argued with me that J tubes are awful and they can never be switched to balloon button, which makes me think he’s out of his mind, since I have known and seen a lot of people with balloon button J tubes. He wants it to just be one of those long dangly tubes and that’s it, while I on the other hand would really like the longer tube to be switched to a button once my stoma is healed enough.

And as all my doctors have done recently, is pass me off onto another doctor and then it just creates this vicious cycle of doctors who don’t want to treat me. I’ve had to deal with this cycle for a while now and it’s completely unfair to me and my mental health. Constantly dealing with doctors that don’t even want to give me the time has worn down on me. The surgeon didn’t want to give me the feeding tube at all and wanted to pass me off to some sort of motility doctor in Kentucky. The surgeon was saying this motility doctor could somehow cure my Gastroparesis. I don’t remotely believe that for a minute, I’ve gone through the entire Gastroparesis protocol over the last two years and I refuse to be a guinea pig for any new procedures.

So when the surgeon started approaching that topic I snapped on him, and I am not sorry about it at all. I told him I was tired of being passed around to a bunch of doctors who are all “too uncomfortable” to treat me. A lot of my doctors just don’t care about me as a human being with my own thoughts and opinions anymore. Since I got my port and feeding tube almost all of my doctors I’ve seen recently are just freaked out that I’m as sick as I am.

Or that I’ve been told I was faking it to get attention. Or that I’m anorexic and don’t really want to eat normally, so many awful, mean things have been said to me. I’ve also had doctors tell me that Gastroparesis wasn’t even a real illness. Even though But I’m tired of being passed around; I’m also really tired of people saying I should have minimum to no involvement in my care. I stood up for myself and I don’t think I was particularly rude, I was standing my ground to get the care I need to function more like a normal person.

After my whole regular induced rant at the surgeon he just stared at me for a little bit. That’s another thing I get annoyed with on a regular basis, no one treats me like I’m a knowledgeable about anything. Everyone automatically assumes I’m just another “sheep” of a patient willing to just follow doctors blindly. Which I do not, I have my own thoughts and opinions. And a lot of doctors have treated me this way until I start talking, then they start realizing that I really understand all my illnesses and the medical treatments they require. A couple of my doctors were actually really happy that I question them, I help them think outside the box and I get to learn more about my illnesses.

But my surgeon seemed like he expected for me to follow him blindly. Which I definitely wouldn’t I don’t have that much faith in him. After a bit of arguing he finally agreed to place a G/J tube. A G/J tube for those who don’t know is a tube that goes through my abdominal wall. 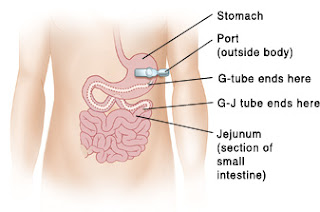 The G part will stay in my stomach and allow me to vent and drain it. Meaning I can get excess stomach acid, air and anything else in my stomach out. So that should really help my nausea hopefully because sometimes it gets so bad. Then the J part of the tube will be threaded down into my Jejunum via a scope and that will deliver my formula to where it’s supposed to go to be absorbed.

My surgery is scheduled for March 27th, so next Tuesday I’m really excited to get this surgery. I’m really tired of my NJ tube, I am grateful for the nutrition I’ve been able to receive from it but it just hurts so bad. My throat obviously hurts from the tube constantly rubbing my throat, and also rubbing my septum. I hope no permanent damage was done to my throat or nose during this whole process, fingers crossed anyway. I don’t know when I’ll be able to start writing post op blog posts but I’ll try to start writing as soon as I’m able to.
Labels: explanation feeding tube G/J tube gastroparesis spoonie spoonie life surgery this spoonie speaks