One Month With My Feeding Tube 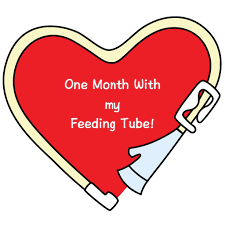 So Friday (3/16/18) makes one month that I have had my feeding tube. My adventure so far has been a roller coaster, with so many ups and downs, well a lot of downs really.

I have had a lot of issues with my various non GI related doctors seeming like they don’t want to continue to care for me because I have a feeding tube now. The doctors at my Primary Care office seem to be afraid of me now that I have a feeding tube and they especially don’t like that I have a port too. I don’t understand why they seem so frightened of me; I have these tools so I can live as well as I can.

I also had a problem with my Neurologist who I saw on Tuesday, she was rather obnoxious, though I haven’t seen her since before I got my port placed. I had asked her for some IV Zofran because my port is currently accessed so I can administer high dose IV antibiotics because I have an infection related to when Cleveland Clinic placed my feeding tube. The antibiotics have been making me really nauseous because it’s a high dose. My Neurologist asked me if I had Home Health administering my antibiotics and everything, I said I had Home Health but they cleared me to administer my own antibiotics because I showed no symptoms of being allergic to them.

My Neurologist proceeded to freak out and yell at me saying I should have no business in doing anything with my feeding tube or my port by myself. This irritated me because I don’t see why I shouldn’t be involved in my care. I don’t like to rely on others for medical things that I can easily learn to do myself. And then she proceeded to rant that she didn’t even understand why I needed my port or tube. She thinks I have a eating disorder and told me I need to get my tube and port removed as soon as possible and to stop being so melodramatic. She also doesn’t believe that Gastroparesis is a real illness. In all I think that’s the worst appointment I’ve ever had with her, usually she’s really nice to me.

Another problem I’ve had is trying to get Cleveland Clinic to send a referral down to OSU to have them place my J tube, because I’m very uncomfortable with letting Cleveland continue my care. I’m not even sure the number of times my parents and I have called them asking the referral. It’s been pretty bad, my NJ tube was only supposed to stay in for two weeks, then be removed and replaced with a J tube. We’ve been asking for it for maybe three weeks and they only just now sent the correct paperwork on Wednesday of this week, and frankly I think that’s just stupid.

I have a surgery consultation type appointment next Thursday (3/22/18), though I’m not optimistic about it. Last night OSU called me and tried to tell me they wanted to cancel my appointment and to go back to Cleveland Clinic for my J tube surgery. I told them that wasn’t happening and if they cancelled my appointment, I’d show up anyway. The person I talked to on the phone said that it was ultimately the doctor’s decision if I’d be allowed to have my surgery there or not.

The amount of people treating me poorly because of this is insane, and I don’t understand why this all has to be this difficult. Sometimes it seems like I was treated better before I got my tube placed, but now that I’m trying to get better everything has just gone to hell. It’s left me feeling frustrated and a bit depressed that I have to deal with all of this. It kind of makes me feel like a leper.

And I’ve experienced a few Tubie nightmares over the last month too. . I’m a small person so the supposed ‘adult’ sizes of medical instruments don’t fit me. I’m supposed to have an extension set on my feeding tube because it’s a pediatric tube, so it ended up being pretty short, it only comes past my chin so it’s difficult to see what I’m doing without the extension.

I have actually broken two extension sets since I’ve been home, though I have no idea how they keep breaking, I try to be really careful with them. But they keep breaking in the same place. The extension sets are important to me so I can do things on my own and it also acted as a fail safe. In case my tube clogged it would clog the extension first and I’d be able to remove it, unclog it, and then everything would be fine. Without my extension I run the risk of clogging the tube is really high because I need to put my medicine through my tube so it will work correctly.

I’ve also had a few mini clogs since I’ve been home, though that’s to be expected since I put my medicine through my tube regularly. I do it because of my Gastroparesis, I don’t absorb anything correctly when it goes into my stomach. Putting my meds through my tube versus taking them normally has been night and day in terms of how effective they are. But the clogs haven’t been too awful; thankfully we’ve been able to take care of them fairly easily.

I’ve also gotten gawked at like I’m sort of circus freak. It doesn’t matter where I go, people stare a lot and it’s really hurtful. Though I hope one day I’ll become immune to the stares and disgusted looks. I try not to dwell on it because people nowadays are completely disrespectful and it’s a waste of time.

Even though I’ve had to deal with a lot of discrimination and various other bad things since I’ve gotten my tube, I’m still happy I have it. I’ve gained weight and I feel a lot healthier than I did before I got my feeding tube. I’m thankful for my tube because I have energy again; though I do still get tired easily it’s an improvement. And by taking my medicine through my tube some of my other symptoms have improved because my body is adequately absorbing my medicine. I’m trying to take it all one step at a time as best as I can. And I have my friends and family supporting me as much as they can, one way or another things are going to get sorted out.