Am I Less Than Human? 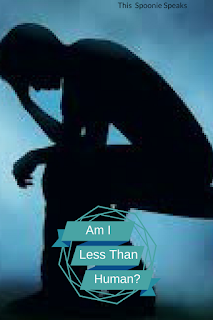 I’ve run into a bit of a recurring problem since getting my feeding tube and my port, people and other doctors have only had terrible things to say. Or they don’t even want to touch me. I don’t understand why I’m getting treated so badly, my port and my tube are keeping me alive. None of my doctors want to use my tube or port in my care and I think it’s ridiculous. I didn’t have these things put into my body for fun; they should be a part of my care. I’m hoping to find a new primary care doctor that agrees with my point of view.

And just going to lay out a few examples of things that have gone wrong.

1. I went to the Dublin Methodist Hospital ER because my NJ tube gave me a sinus infection. When I went back with the nurses to get my room, the nurses acted like they’d never seen a feeding tube before. They were a bit skeptic about my actual need for it, as well as my need for my port. That was mostly just annoying; it’s stupid that I always need to justify my need for things. Though the CNP that treated me did end up being pretty decent, though I had to convince her to put me on antibiotics because I’d be really sick if she didn’t.

2. Another thing that went wrong was when my parents and I went to lunch after I got discharged from the ER. It was my first non-medical outing since I got discharged from Cleveland Clinic, but it was a disaster. People just stared at me, like I was a circus freak. People would also stop near our table just to stare at me.

3. I had to go to my PCP office because the antibiotics that I received in the ER didn’t clear up the infection at all, it just suppressed it enough to be slightly less bothersome. Really the only other antibiotics that really work for me that I’m not awfully allergic to, are IV antibiotics. The options are Rocephen or Vancomycin, I had to sit there and convince my PCP that if she just gave me Rocephen I would leave her alone a lot faster because there was really nothing to discuss. In the end I did get the Rocephen, but she seemed surprised and slightly disgusted that I had a port to even do IV antibiotics.

4. The worst interaction of all was with my Neurologist, I still had my NJ tube at the time and my port was also accessed because of the IV antibiotics. She came in, stopped mid step and stared at me. It took a few moments for her to actually ask what was wrong with me. I told her about the decline in my health due to my Gastroparesis, and that my port and feeding tube were keeping me alive in terms of nutrition. And that I needed my port for access to my blood stream, because I have no viable veins, with me getting sicker it was too big of a risk to take if there was an emergency.

She prattled on for a long while, saying that my port and tube were too extreme and that I should have them removed immediately. That I would get better if I just waited to eat on my own, even though it was that thinking that put me in this situation to begin with in general. And she said that if I had these things I should have no part in my care at all that Home Health should be doing all these things for me because I can’t be trusted, and that I shouldn’t have any hand in my care that I’ll just mess it up. This whole encounter left me utterly furious.

In general, all of these situations have made me really mad. I feel like I’ve been reduced down to something that’s extremely less than human. I sat and wondered for a long time why doctors and other people treated me like I was less than human because of these devices that are literally keeping me alive. Honestly I’m not entirely sure why I’m treated like I’m less than human. All I really know for sure is it’s tiring, arguing with people and having to justify my need for my feeding tube and port constantly.

My life is one big battle that I didn’t sign up for. I have these tools to live because I need them; there is no other option than for me to have these things. I feel like I shouldn’t have to justify every aspect of my treatments constantly. Maybe I’m treated poorly because doctors don’t understand my struggle, even though I try to explain it as best I can.

In general I feel like I am a human even if doctors want to treat me like I’m not. Sometimes it’s really hard to believe that though, since I’m often in the presence of doctors. It does really wear down on your self-esteem too, though I try to just brush it off.

In the end I am a person, I am a human. I have thoughts and hopes and dreams just like everyone else. I may be sick but this shows that sick people can still live. And probably most importantly that we can care for ourselves and still have a life, it’s just a bit different than the average person. I’m living just like everyone else it’s just a bit more difficult, I eat but it’s through a tube and I take medicine but it’s through my port. Living like this was an adjustment for me but these tools that I have, have change my life for the better and I will never regret them. These things have given me my life back to some degree, I’m not “healthy” but I’m a lot better off than I was.

Over and over when I encounter mean doctors, or when my doctors treat me poorly I just keep repeating to myself over and over that I am human. I have rights to be treated by doctors regardless of the fact of if they agree with treatment plans that don’t involve them. I’m going to try my best everyday.
Labels: chronic illness doctor doctor appointment feeding tube my life port spoonie this spoonie speaks tubie