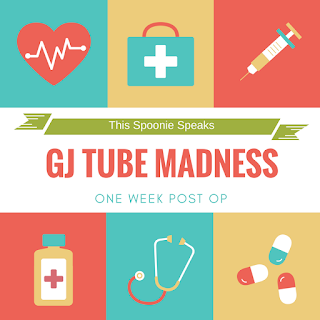 Well today (4/3/18) means I’m one week post op from my feeding tube surgery. This was all a pretty weird process, at least to me anyway because my surgeon is really strange.

He was entirely convinced that I wouldn’t be in any pain at all after surgery and everything would be perfectly fine. He didn’t want to give me any pain medicine after surgery at all, and was entirely convinced that Tylenol would be sufficient. That was obviously not the case at all, when I woke up from surgery I was crying in pain and the nurses were running around trying to get my pain under control. I ended up with a very small prescription for pain medicine but my doctor and his surgical resident refused to really believe it was that bad.

So after my surgery and for the first few days post op, I was home and everything was okay, well in terms of healing and not having an infection. But I was having issues with pain control, for whatever reason my pain medicine that my doctor gave me wasn’t working on me so I was pretty miserable. And the medicine I got, I’ve only taken it one or two other times before so I guess it wasn’t working because of my Gastroparesis.

Generally I have a low fever because of my chemo that I have to take. On Friday, my fever actually spiked to 101 and I was in a lot of pain. I called around to my surgeon’s office and they told me to come in to the hospital just to be safe since my fever was so high. To get to the hospital where my surgeon is, that’s unfortunately like a 45 minute drive on roads with potholes. I was already in a lot of pain when I got in the car, and by the time my mom got me to the hospital I was screaming and almost completely nonverbal because I was in so much pain. 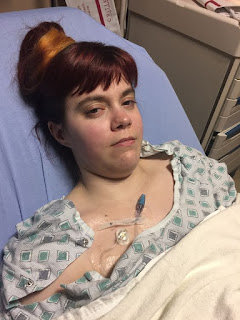 That was the worst pain I’ve ever had in my entire life and I am not one to say that lightly. Everyone has some ten out of ten pain in his or her life and I think that was one of mine, even though I kept saying it was a nine. I just keep thinking that it could be worse and I kept repeating that over and over in my head. But as I sit here thinking back about it, I think that really was a ten. I guess I’m tentative to say things are super painful or to ask for stronger/better pain medicine because of all the Opioid Epidemic issues. I don’t want to be perceived as an addict or like a drug seeker.

Though thankfully the ER took my pain seriously and gave me a lot of pain medicine to try to get me as comfortable as possible. No one really knew why I was in pain they just knew they had to do something. Then when my pain was under control I was sent off to get a CT scan, thankfully I didn’t have to drink any contrast dye. That came back as everything was fine except I had a lot of air in my intestines and a pretty large hematoma on the inside of my abdominal wall.

After that they called my surgeon and he admitted me just in case, unfortunately the only floor that was able to accommodate my needs was the Orthopedic floor. No one up there really knew much about feeding tubes. But I didn’t fault them for that because it wasn’t fair. So my mom and I were able to help the nurses understand my feeding tube care. They were thankfully happy and appreciated learning what my mom and I could teach them.

In general my surgeon figured since I’m young and still have muscle tone in my stomach that, that’s why I have more pain than usual. But the real issue is my surgeon has only ever placed feeding tubes in really old people that don’t do much of anything. My surgeon seems to be very old school and just annoyed at everything that I have to say. He also doesn’t believe that feeding tube buttons exist, he just looks at me like I’m stupid while I try to explain, or thinks I’m looking at some sort of pediatric device.

In the end I stayed at the hospital from Friday morning to Sunday morning. I was originally was supposed to go home on Saturday though. I attempted to eat some Raisin Bran for breakfast that morning; I then proceeded to violently throw it all up (thanks Gastroparesis). After that my stomach muscles started spasming and I was back to screaming in pain. I had to be heavily medicated for a while and I couldn’t really do much on my own, my parents and I decided it would be best if I stayed in the hospital another day.

Saturday night I started feeling like ants were crawling under my skin like I was having an allergic reaction. I think I might’ve had an allergic reaction, though I’m not entirely sure to what though. I might’ve been mildly exposed to coconut somehow maybe because that’s the only thing that I can think of honestly. I also ended up being in a lot of pain, so I needed more pain medication later that night too.

I saw my surgeon Sunday morning and he cleared me to leave the hospital, although still believes that Tylenol is a wonder drug. I also educated my surgeon about the fact that G/J balloon buttons do exist. Thankfully he said he’d look into it, hopefully he doesn’t come up with some stupid excuse as to why he can’t place it once my stoma heals.

I’ve been dealing with really intense muscle spasms because of the surgery, which have been hard to cope with. I’m also trying to work up to looking at my stomach more frequently until everything just feels normal to me. Right now I’m still in the phase of oh my god I have a thing sticking out of my stomach. I’m also paranoid that I smell weird because of the stomach stuff that comes out of my stoma. Is that a common thing to be worried about though?

All in all I was and still am moving around better than I was when I went into the ER; I’m hoping my healing turns a corner soon. So that’s basically all my adventures thus far with my new feeding tube. A lot of pain and tears, but I feel like soon I’ll be moving forward and everything will be okay.
Labels: chronic illness feeding tube G/J tube post op spoonie spoonie life surgery surgery recovery this spoonie speaks