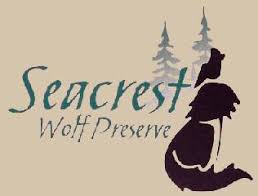 So yesterday (6/5/18) was probably the best day of my whole life! We went to Seacrest Wolf Preserve, it’s an amazing place where you get to interact with the wolves and learn more about them. I actually found this place on Facebook, and I’m beyond happy I was able to convince my parents that we needed to come here on a family vacation. And I also love wolves, they’re my favorite animal, honestly I didn’t want to leave.

We got to meet Arctic wolves and Grey wolves, as well as one of the last British Colombian wolves. We saw the Arctic wolves first and learned more about how wolves act. Such as muzzle greeting, how the wolves say hello, so needless to say we got our faces licked and nibbled a lot. There’s pretty much nothing to fear from any of the wolves at Seacrest, they’re raised to imprint on people and not to be afraid of them. They’re also not aggressive towards people either; all of the wolves were so friendly. 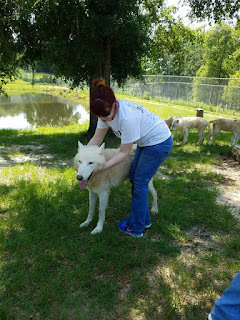 There was a particular Arctic wolf named Yeti that seemed to take a real shine to me. She was a very sweet and she was also very sheddy. Some of the wolves are still losing their winter fur so you can see little puffs of wolf fur floating around. She let me scratch her out a good bit, though I really just wanted to give her a thorough brushing. She was the alpha female of the pack and accepted me as a part of it, which was really cool.

We also got both packs of wolves to howl, there’s something about a wolf howling that just touches your soul. We took a break after interacting with the Artic wolves to drink some water and have a snack because it’s summer in Florida, the heat is awful. Granted I do have to say that the weather wasn’t too awful yesterday compared to what it was over the weekend. Also in the enclosures they have logs/benches you can sit on so you don’t have to stand the whole time. The wolves will come right up to you for a good dose of petting and kisses. The wolves do jump, but just like any other dog you just shove them back and they’ll get the message. They’ll also paw at you to get you to come closer to give them more attention. I have a couple claw marks on my shoulder, but it isn’t anything serious, it barely broke the skin though I did clean it.

And me being the weird animal person that I am I also made friends with the cat that lives on the property. She was a sweet little Calico that loves chin and ear scratches. According to the staff she likes to walk around on the fencing and taunt the wolves for fun.

After that we went to the Grey wolf enclosure, Grey wolves are my favorite wolf breed. There were some pups in there, I think there were three of them. They weren’t little, pups refers to any wolf under three years old. They have a babysitter wolf that keeps any eye on them to make sure that they don’t do anything they shouldn’t be doing. One of the pups, he was about a year old, but he was massive. If they hadn’t told me how old he was I would’ve assumed he was fully grown, he’s going to be a really big boy when he’s done growing.

The wolves when they were standing up on a big rock platform also saw my hair up in a bun, they tried to eat my hair. They weren't doing anything to be mean, I'm guessing they may have thought my hair was a toy. So I ended up with wolf drool in my hair along with all over the rest of me. 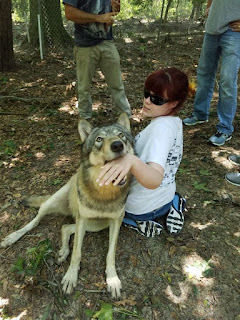 I got accepted into the Grey wolf pack as well by a sweet little girl named America. She pretty much wallowed all over me, so I gave her a lot of belly rubs. At one point she started nibbling and licking me all over. According to our guide type person, she accepted me into the pack and was grooming me to make sure I didn’t have any fleas. She also started chewing on my hand and arm because she was trying to play with me. I wanted to bring her home with me she was so lovey.

Also one of the babysitter wolves came up to me for attention. Our guide person said that, that particular wolf has only come up for attention like that three other times. Mainly because he takes his job as a babysitter very seriously, so I felt kind of honored that he let me interact with him.

It was an amazing experience, something that I won’t forget for the rest of my life. I highly recommend if you’re able to go out and interact with them that you do it. Even at the cost of being crashed in bed for several afterwards like I’ve been, I still recommend it and I would do it all again it a heart beat. 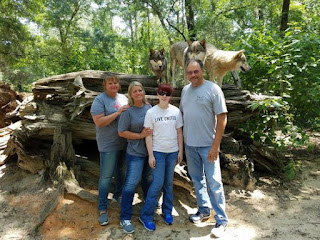