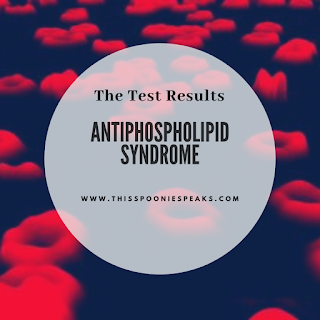 So I’m back again with another health update, and it’s been frustrating.

So last time I updated you guys we were waiting to do the labs for Antiphospholipid Syndrome, those labs were murder. I had them drawn at my Rheum’s office so they did it peripherally instead of from my port and I was cringing the whole time. They had a whole basket of vials to take from me so I felt really bad after that, shaky and just generally bleh.

So my blood was shipped off all the way to a special lab in Texas. Originally I got an email from a PA that works with my Rheum saying that my labs were fine and I didn’t have Antiphospholipid Syndrome. Well apparently the PA read my lab results incorrectly, on October first my Rheum’s office called me and told me I actually do have it.

Antiphospholipid Syndrome (APS) is an autoimmune condition where my body attacks certain things called Phospholipids. They’re found in cell walls and blood vessels. My body damaging these Phospholipids can lead to blood clotting and cause serious problems like Strokes and Pulmonary Embolisms. I also have found out that this can cause low platelet count, meaning sometimes my blood just doesn’t clot because there aren’t a lot of platelets around to do their job. Which does make some sense because my platelet count has always been a bit strange for maybe two years.

So now I’m on an Aspirin Regimen to prevent any potential clotting. Though if I go into intestinal failure at some point I’ll have to go on TPN immediately. My Rheum thinks it showed up in my labs because I’m still struggling with nutrition and keeping my vitamin levels stable. Usually APS isn’t found until after a traumatic event such as a stroke, or if someone has a late term miscarriage and other issues with pregnancy.

I haven’t had any severe clotting issues, but I’ve had a few odd minor incidences. Once I was getting labs peripherally drawn before I got my port placed, they had to stab me multiple times because every time they tried to draw my blood the needle would clot over rather quickly. After that happening a few times the tech was really confused and upset she had to stab me four times.

Then another time was when I was at Cleveland Clinic, when I had my NJ feeding tube placed my port clotted. They stabbed me in the arm with Heparin and put special stuff through my port that dissolved the clot. After that and we could use it again just fine but I had to get stabbed with Heparin every night after that.

I guess I’m lucky they found it before any severe clotting episodes happened. I know I should be more…I don’t know, grateful I guess that I just need to take Aspirin and for right now there aren’t major complications. It just frustrates me and makes me mad that my Rheum’s office didn’t even apologize for originally telling me I was fine. And really I just need more time to study APS and how it can affect my body. Baby steps, one thing at a time so I don’t get overwhelmed. I also know I don’t have it nearly as bad as other people. It’s just that I’m getting so overwhelmed with all these medical things just piling up I kind of lost my mind a bit. So sorry to everyone that had to deal with me freaking out, especially my art therapist, who had to deal with my initial freak out and had to talk me down.

Just thinking about all this stuff is irritating. So this post is short and to the point. But if anyone else has APS or can point me in the direction of other blog posts that’d be awesome.