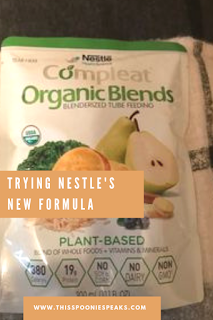 Though this product was a gift from Nestle Health Science, all my opinions on this product remain my own. Also, always talk to your doctor before trying out a new formula to better monitor for any potential complications.

Nestle invited me to trial their new blenderized, whole food formula called Compleat Organic Blends. They have a Chicken Garden Blend and a Plant-Based blend, which is the one I chose. Both blends contain no soy/corn, no dairy and are Non GMO. Both formulas also have Pediatric and Adult formulations. But I’ll mostly be talking about the Plant-Based Adult Formula, for the duration of this post. 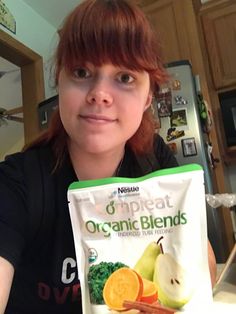 Both have the same amount of calories and vitamin values though, so really it boils down to personal preference on which formula you should get for you or your child.

Though for any potential food allergy suffers like myself who are allergic to coconut, they do use coconut in the same facility as this formula. But the formula is NOT run on the same equipment that the coconut has been on. In my case this ended up being fine, because I generally only react if I ingest coconut somehow.

Why I need my feeding tube

I got my NJ tube in February after fighting for awhile with my Gastroparesis. I ended up having a drastic decline in my weight and overall health to the point that I wasn’t really living anymore. I was present and trying to do things, but my malnutrition and laundry list of vitamin deficiencies made functioning difficult and overall everything was just hazy. It was like trying to think when you're getting sedated and your thoughts get all jumbled up.

I had an appointment at Cleveland Clinic, which turned into a direct admission after I saw him because he was seriously worried about my health. I had my NJ tube placed a few days later, I also needed to have my labs checked frequently for various vitamin deficiencies so we could correct them via IV. I was also diagnosed with Adult Failure To Thrive, Protein-Calorie Deficiency and Malabsorption (specifically Potassium and Magnesium). I ended up spending a week at Cleveland Clinic before I was well enough to be discharged. If you want to know the whole story click here. 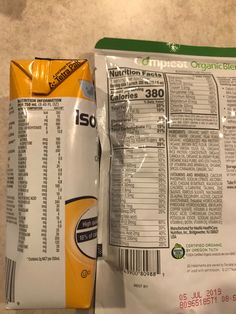 Isosource is my regular formula, since I adjusted to it at the hospital I’ve been on it ever since and I haven’t had many issues with it. It’s high in protein because I suffer from Protein-Calorie Deficiency. 18% of calories in this formula come from Protein. 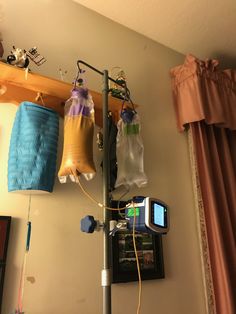 Ideal administration of this formula is via bolus feeding with a syringe through a 12Fr or larger sized feeding tube. But I was able to continue to feed using my feeding tube pump R2D2 (a Kangaroo Joey) my feeding tube button is also 18Fr. Because blenderized foods are automatically thicker the formula itself is also a bit thicker than your average liquid formula. If needed though you can dilute one pouch with 150ml-300ml of water or increase your pump rate by 5-10ml per hour to compensate for the force needed to get the formula through the tubing. This is something I would definitely talk to your doctor/nutritionist about doing first though.

Just to make sure my tube stayed patent while I tried this formula, I increased my flush rate in my pump settings. I use the Joey Hydrating sets, which has a formula bag and flush bag that’s just plain filtered water. Usually my flush interval is 100ml every four hours but I talked to my nutritionist and she was okay with me doing flushes of 50ml every two hours with periodic flushes by hand if I could tolerate them.

These are just a few things that I thought could be potential improvements or other things I noticed while I was using the formula.

Pouches aren’t exactly the best packaging, pouches can be really hard to open and handle when you don’t have the best hand dexterity. Potentially switching to a carton with a wide opening could be a good idea. It’d be easier to pour and clean out than a pouch. While I tested this formula, I had to enlist the help of my dad to pour the formula into my feed bag for me so I didn’t spill it all over myself.

Something else that will happen is that the formula will stain your extension set tubing orange. It will also stain clothing, be mindful when you're pouring the formula.

While unfortunately this formula wasn't a fit for me, it still can help a lot of people. Formulas work differently for each person, some can tolerate other things that some people can’t it’s really a toss up. But if you think that this could be the right formula for you then talk to your doctor/nutritionist about possibly trying it out. You can request a sample from Nestle's website as well.