My Experience with Lunesta 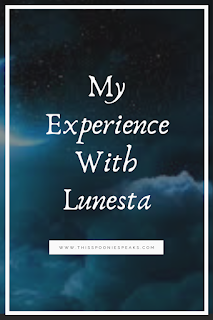 So it’s no secret that I have Insomnia, it’s gotten steadily worse over the years and it’s pretty irritating. At first I was able to sleep okay just from taking the combination of medicines that I have to prevent my migraines. Then my body started adjusting to their effects and I no longer felt tired after taking them. After that my doctor recommended I start taking Melatonin, which again worked for awhile then stopped working. Then my doctor told me to take Benadryl at bed time which again worked for awhile then my body got used to it. I increased the amount of Benadryl, I was taking it over about a year or so.

Recently I went to my Rheumatologist for a check up, after many weeks of not being able to get more than three or four hours of sleep a night. I told him I was having trouble sleeping no matter what kinds of medicine I took or what I did. Thankfully he already knows I’ve had a long history of not being able to sleep well.

He asked me if I had ever taken Ambien before, it’s one of the different kinds of sleeping pills. I’ve had Ambient before, I took it during my Cleveland Clinic admission to be able to sleep. That was fine for a couple days, but one night I started to hallucinate and have intense nightmares. I hallucinated that when my nurse came in for lab draws and vital check, that she was actually going to strangle me with my blood pressure cuff.

Obviously my Rheumatologist decided against putting me on Ambien. I could’ve experienced escalating side effects from it. I could’ve hurt myself or done something dangerous if I started to hallucinate.

Other than the Ambien I’ve never had any other sleeping pills. This has been a whole new experience for me in general. I would say being more rested than I usually am, has helped me mentally be able to handle my pain.

He prescribed me 2mg of Lunesta to take every night so I can sleep better. The tablet dosages come in 1mg, 2mg and 3mg tablets. These are quick release tablets, they have no coating like other medications do. So when you take the tablet swallow it fast because they taste awful, take it with a flavored drink. 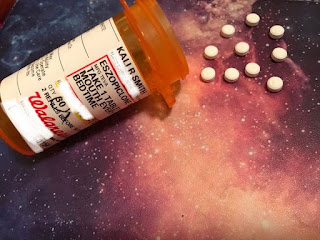 Lunesta is a prescription medication to treat insomnia, it’s something called a sedative-hypnotic. Usually it’s used to treat insomnia short time (a few weeks). But you’re doctor could prescribe it for long term use at their discretion as well.

How does Lunesta work?

Lunesta is a sedative-hypnotic, which means is slows down Central Nervous System activity. It also produces a sense of calm.

Common Side Effects of Lunesta

Have I had Side Effects?

I haven’t had many side effects from this medication surprisingly and getting decent sleep has helped me so much. I’d say sometimes I do wake up with the hangover feeling. My brain generally feels like its full of cotton. But after I drink a bunch of water and move around some, then it’s not so bad after that. I think it’s made me a little nervous at night, but I’m generally prone to nightmares.


I have had really good results with Lunesta despite some minor side effects. It's nice to be able to sleep well since I've had a really hard time. Sleeping regularly has also helped me cope with my chronic pain/Fibromyalgia pain a little better. My pain doesn't feel as magnified as it has been so I'm really happy for that. Though it isn't perfect everyday, it's still a vast improvement over how I felt before starting the Lunesta.

Overall if you’re looking into insomnia medication I would recommend this one. At least as long as it doesn’t interfere with any of your medical conditions and other medications that you take. Keep in mind that sometimes the risks outweigh the benefits. You need to work with you’re doctor and figure out what works best for you. But also if you do have insomnia your doctor might not immediately prescribe you sleeping medication. Almost always they’re going to have you try melatonin and/or Benadryl first and then go from there.


I am not a doctor and this post is not meant to be medical advice. If you have trouble sleeping always consult your doctor.
Labels: chronic illness insomnia lunesta medication medicine painsomnia spoonie spoonie life this spoonie speaks