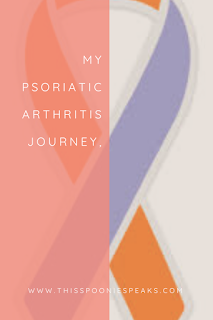 So as some of you may know I’ve had hip pain for a long time, around 3-4 years. It’s gotten progressively worse over the years but no one really thought that it was anything serious so we just kept trying to cover it up with systemic steroids and pain medicine.It kind of worked well enough for awhile but really it was a downhill battle.

The first time I went to physical therapy for my hips and legs it was because I was having a lot of pain. It was highly likely that I had micro fractures in my shin, so off to therapy I went. We also strengthened my hips and core, along with doing something called Astym. It helps breakdown scar tissue, which I have a lot of in my calves. At first It hurt like hell but then after awhile it felt nice and my pain did decrease a bit.

For my second round of leg physical therapy I was being treated by my (old) pain management clinic. They adjusted my pain medication accordingly, I was also sent off to physical therapy. The physical therapy was to strengthen my hips, core, ankles and knees. In my opinion I worked really hard to get stronger in hopes the pain would lessen. Eventually I just plateaued and was no longer required to see my physical therapist in office, but I continued doing my at home exercises hoping I’d get stronger over time. I’ve been doing the home exercises from this round of therapy up until now, but as usual I just feel stuck.

After we got home from Ireland back in June my hip pain was noticeably worse and didn’t know what to do about it. I had an appointment with my Rheumatologist not long after we got back and told him about my pain in my right hip. It’s constant and fairly severe. We had decided to do a steroid injection into the Bursa and see if that would help the pain, along with getting an x-ray of my hips and pelvis, surprise it didn’t help at all. I had to go back in a week later, I was still in pain and frustrated. We decided to try a steroid injection into my hip joint because that’s where my pain is focused at.
That injection didn’t work either so I ended up also needing a hip MRI so we could get a in-depth look of what was happening in there. The result of the X-ray was that I’m developing Arthritis in my SI joints so that would explain that pain. The result of the MRI was that my hip joint itself is still intact but a lot of my hip tendons were inflamed and angry.  Another thing they found on the MRI is that the Bursa is inflamed and has extra fluid around it. These things put together add up to a diagnosis of Psoriatic Arthritis.

So first of all I do have Psoriasis but it's kept under control by my Humira and a immunosuppressive drug called Imuran. But now that my body is going downhill a bit more we have to change up my medications and it’s a bit frustrating.

So what is Psoriatic Arthritis?

Psoriatic Arthritis is a a common illness that happens because you’re immune system starts attacking healthy cells and tissues. This immune response causes excessive inflammation in your joints. But also usually this illness affects the large joints and the back. It’s possible to not have skin lesions but still have the arthritis. Psoriatic Arthritis is unfortunately an illness that gets worse over time. But just like with my skin lesions it’s possible for it to either hurt less or you could go into remission entirely.

What are the Symptoms?

Some potential symptoms of Psoriatic Arthritis are swollen fingers and toes, foot pain or low back pain. You can have pain just about anywhere else too, for example I have pain in my hip. I’m also thinking that it’s possible that I have a few other joints that are problematic. Sometimes not all the signs will show up or it might take awhile to get a diagnosis, but if you’re really struggling and you haven’t seen a Rheumatologist yet I really recommend you try to get in to see one.

What are we going to do about it?

So what are we going to do about my Arthritis? Well that’s where it kind of turns into a bit of a mess, I’m switching biologics! Biologics are drugs that don’t stop your entire immune system from working. The kind of biologic I take is called a TNF-Alpha (Tumor Necrosis Factor-Alpha) blocker. I’ve been on Humira for around two years I think, honestly I kind of expected to be on Humira for most of my life.

I’m switching to a biologic called Remicade. Remicade is a TNF blocking medication that is slowly infused over roughly 2-3 hours. The infusion could take more or less time depending on how my reaction to it is.

So I’m not sure how it’s all going to go but I hope it’ll help me. I’d love to be able to walk more or at least walk with less pain. On top of Remicade I’ll also get Tylenol and IV Benadryl because it’s common to have side effects like fever, flushing, nausea, vomiting and some not serious  histamine like reactions. The Tylenol will help the fever if I get one, which is likely and maybe with potential bone pain but I’m not overly optimistic. I also plan on taking Claritin because it’s actually known to help bone pain. And hopefully the Benadryl will just knock me out and I’ll be able to get through the worst of it.

Another problem we’ve encountered is my regular infusions during the week are Lactated Ringers Monday and Friday and a Banana Bag on Wednesday. We’ve had the  pharmacy look into it and they have said there’s not a definitive yes or no if the Remicade is compatible with my Lactated Ringers. Because of that, the pharmacy is saying that I can’t run them at the same time through my port  and it’s kind of frustrating.

So I have a couple options

Honestly I’m not entirely sure what I’m going to do. I think it’s still going to be a little bit before I can start unfortunately. I checked my status yesterday (10/28/19) and the orders are all there and accounted for, but I guess my Rheum made an error when filling out the paperwork and they’re waiting on him to fix it. We’re also waiting on the Prior Authorization to go through with the insurance company. I emailed him today and asked him about it to see if that would make the process slightly faster.