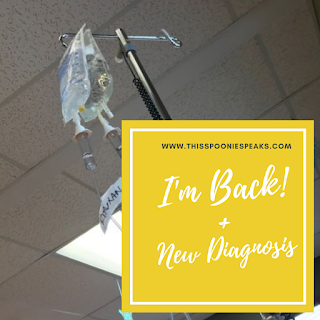 Hi everyone! I just wanted to pop in and let everyone know that I plan on coming back and blogging regularly again. I was getting so burnt out that I honestly didn't know what to do with myself. And honestly life happened, I've been so caught up in wedding planning and all that, that I've been a bit of a mess. And honestly with the whole pandemic happening not a lot was happening in my life worth writing about, but I've got some posts in the works and a lot of medical stuff to catch you guys up on now.

The biggest medical thing is if you follow me on Instagram for awhile now you've probably seen that I've had a lot of problems with my lungs. I've been coughing up blood since October of 2020 and I've had problems breathing, low oxygen saturation honestly it's been absolute hell and honestly really scary. In typical me fashion I tried to ignore it hoping that it would just go away on it's own, that I just had bronchitis or something. At the time I was also on IV antibiotics because I had developed Cellulitis in my arm I thought that those antibiotics would help my lungs too, they didn't. I had a post admission follow up with my Rheum and he found out about my lungs and he wasn't happy that I hadn't told him what was happening. He's a great doctor and really does care about my health so I did get a bit of a scolding because he said it sounded like I had severe pneumonia and he sent me for a chest x-ray straight away, thankfully I didn't have pneumonia but you could see that something wasn't right with my lungs.

But I hadn't finished my IV antibiotics yet because I was doing them through Home Health and he wanted me to finish them and then we'd reevaluate the situation. After five more days of antibiotics I was free, but still frequently coughing up blood, barely sleeping and breathing felt like constantly inhaling broken glass. We waited one or two weeks for the IV antibiotics to leave my system and then started a strong oral antibiotic that I usually take for my lungs which unfortunately didn't help either and things became increasingly concerning and I had to have a CT scan. That scan showed that I had significant damage/inflammation throughout both my lungs so I got urgently referred to a pulmonologist.

It took a little while to get in to see them because somehow my referral got lost so I had to have it resent twice. I don't know why but I always have issues with referrals getting sent places it was really annoying. But when I finally got in to see them I immediately had a battery of tests ordered lots of labs, another chest x-ray, a high resolution CT scan (which I didn't know was a thing), a echocardiogram and a lung function test.

The noticeable things were that the CT showed even more damage than the first one, though I'm not sure if it was because it was a better set of pictures or if my lungs got worse that quickly. But the damage is called Ground Glass because the damage looks like flecks of glass and it's basically the in between of  healthy lungs and severely damaged lungs. And my PFTs showed that I have issues inhaling enough air and my oxygen saturation is constantly hanging around in the low 90's, high 80's.

But all of those tests ruled out some scary diagnosis's like Bronchiectasis, Pulmonary Hypertension and some other heart condition I can't remember. And amazingly I was getting these results back really fast so I wasn't waiting weeks and weeks for all these results though I think some of them were rushed.

So after we got all of those results back my doctors decided that I needed to have a Bronchoscopy. A Bronchoscopy is where they stick a camera into your lungs and look around, put water into your lungs and suck it back out to test it and potentially take biopsies. And that was to make sure that I didn't have anything structurally wrong with my lungs we couldn't see on a scan. And to make sure nothing was growing in my lungs. But they tested the lung wash water for literally everything they possibly could and thankfully everything came back negative.

In the end my Rheum and both of the Pulmonologists handling my case had a meeting and I've been diagnosed with Interstitial Lung Disease and my Arthritis has been reclassified from Psoriatic to Rheumatoid.

Interstitial Lung Disease is a group of disorders that means the tissue that surrounds the lungs air sacs, blood vessels etc, gets scarred and it gets hard to breathe. For the most part the damage is irreversible but some of the "newer" inflammation may be once you start treatment. It can be caused by hazardous things like coal dust and there's autoimmune causes like Rheumatoid Arthritis which is my Arthritis got reclassified. And according to my Rheum, the lungs are one of the most common organs to have issues with. But the treatment for it mainly is steroids so I've been on steroids going on three months now and I'm not thrilled about it. The side effects have been hell and I'm not going to lie I begged them to not make me go on steroids, but they told me I didn't have any choice.

Also at the time I had switched Biologics from Humira to Remicade but because I was so sick I wasn't allowed to take it and then we decided to make the switch again. This switch was from the Remicade to a chemotherapy called Rituxan which has been a nightmare. I got my second loading dose two weeks ago and honestly I still feel like crap from it. But this drug you take  a lot more spaced out but I still have to wait like 4-6 more weeks to potentially see an improvement in my arthritis/lungs.

But if the Rituxan fails then I have to switch to a drug called Cytoxan which is a really strong chemo. Which led to my Rheum having the discussion of if Jonathan and I wanted children in the future and how that would effect me because there's the possibility the medication could make me infertile. But I don't mind because I don't want children, I've never seen myself as anything more than a cat mom. But for right now I'm more concerned about seeing any improvement in my lung health, honestly my arthritis would just be a side benefit.

My wedding dress finally came in it's beautiful and I'm so in love with it I'm going to be a Halloween queen. But we didn't have anywhere big enough to put it upstairs so we had to put it in the basement hanging from one of the floor joists, with the garment bag safely wrapped in a large garbage bag just to be safe. Unfortunately I can't post any pictures of my dress anywhere because Jonathan reads my blog and has an Instagram. We've also gotten all the centerpieces and the decorations to go on the centerpieces. We also picked out the bakery and flavors we're going to get our wedding cake/cupcakes in. I've also looked at bridesmaid dresses some, I picked a color but I'm mostly leaving the style up to them to choose. We also got out cake topper which is Jack and Sally from Nightmare Before Christmas and our toast glasses are also Nightmare Before Christmas. 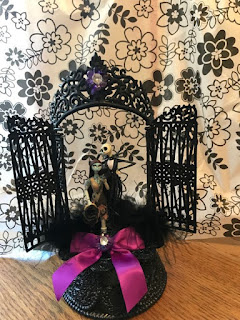 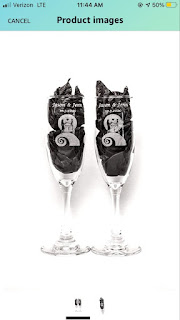